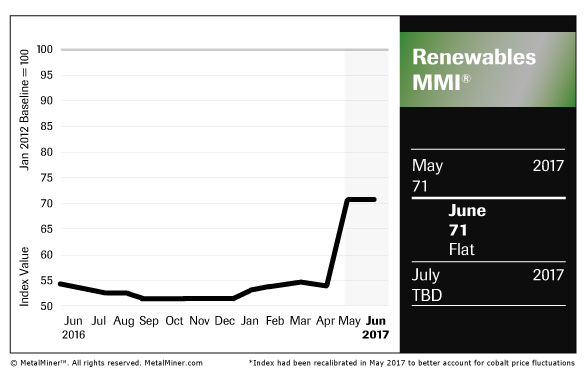 After a 17-point leap in our Renewables MMI from April to May, the sub-index — which tracks metals and materials going into the renewable energy industry — posted no movement for our June reading, standing at 71.

(A quick note: Last month, the sub-index rose to 71 after a recalibration of our index to better account for cobalt price fluctuations.)

But that doesn’t mean there were not big swings within the sector — far from it.

U.S. steel plate, the heavy hitter of this group, posted a 4.8% drop last month — but that quickly reversed itself.

This time around, U.S. steel plate bounced back, posting a 2.7% increase. The bounceback followed a trend of exclusive growth for U.S. steel plate in 2017, as the 4.8% drop reflected by the May 1 price marked the only month-to-month drop of the year thus far.

Unlike steel plate, U.S. grain-oriented electrical steel (GOES) went in the other direction, posting a price drop that nearly erased previous the April-May price increase. This month, GOES dropped 6.2%, one month after prices rose by 9.1%. (More on how GOES does/doesn’t trend along with broader steel markets in the section below.)

What’s the Deal With GOES?

As MetalMiner’s Executive Editor Lisa Reisman wrote Thursday, GOES prices have been on a “roller coaster ride” so far this year.

Globally, however, GOES prices are on the rise. Why? That has been driven by an increased demand for electric cars and GOES producers in the U.S., Korea and Japan securing tonnage at a $400-500/metric ton increase over previously contracted prices.

Domestically, while prices for GOES — metals used in electrical transformers — went down this month, Reisman predicted that likely won’t become a trend throughout the remainder of the year.

“It’s hard to see any outcome not resulting in rising U.S. GOES prices for the second half of the year,” she wrote.

Again, looking to the global picture, good news for this sector is the growth of the renewable energy industry overall.