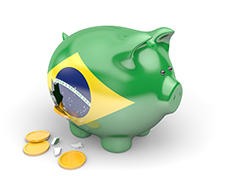 It was a busy week in the world. On Thursday alone there were elections in the U.K. (which resulted in a hung parliament) and former FBI Director James Comey testified before the Senate Intelligence Committee.

Before we head into the weekend, let’s look back at the top storylines in metals news on MetalMiner this week:

Speaking of politics, our Stuart Burns wrote about Brazil and its efforts to push its way out of the doldrums of a recession, while also struggling with the specter of corruption.

One year after former President Dilma Rousseff was impeached, her successor, Michel Temer, is facing questions about corruption. The BBC reported Thursday Brazilian judges have chosen to delay voting on a case that could in fact send Temer packing (an outcome which would continue a period of presidential instability in Brazil).

The Brazilian economy posted a solid first quarter, in part on the back of a record soy bean harvest. It remains to be seen if second-quarter numbers will be as strong.

A Challenger for the London Metal Exchange

On Monday, NFEx Markets announced it will be aiming to open its own base metals trading platform, which would compete with the longtime industry stalwart London Metal Exchange.

The company has offices in London and hopes to start the trading platform in the first quarter of 2018.

Whatever happens, the London Metal Exchange has been around for 140 years — it will be interesting to see a newcomer join the trading fray.

Qatar and the Complex Middle East

Again, our Stuart Burns writes, this time on the diplomatic freeze that began Monday between Qatar and a bloc of its regional neighbors: Saudi Arabia, Bahrain, UAE and Egypt.

“But action led by Saudi Arabia and the United Arab Emirates this week illustrates the complex nature of regional politics and brings into focus how rapidly alignments and priorities are changing,” Burns wrote.

Keep an eye out Monday for the second part of Burns’ coverage of the situation, as he’ll delve into the economic impacts of the diplomatic break for Qatar.

The Month that Was

This week we rolled out our monthly MMI reports, which give you a window into what happened into the data and trends for a wide range of metal types and industries.

The highlights? The roller-coaster ride continued for grain-oriented electrical steel (GOES), stainless steel is back down to last summer’s lows and total construction spending in April 2017 went down from the previous month, but greatly exceeded the April 2016 total.

You’ll want to read all of the reports in their entirety. Look below for links to each:

PREVIOUS POST:
Renewables MMI: U.S. Steel Plate Bounces Back, GOES Takes a Fall
NEXT POST:
Saudi-led Coalition’s Blockade of Qatar — Why Now and What Are the Economic Impacts?