Our June MMI Report is in the books, and there’s a lot to unpack.
Benchmark Your Current Metal Price by Grade, Shape and Alloy: See How it Stacks Up
Out of 10 MMI sub-indexes, four posted no movement from our May MMIs. That wasn’t true for all, though, as the report shows promising signs for construction (compared with last year). Like the Construction MMI, growth in the automotive sector slowed a bit, but still performed better than at the same time last year. 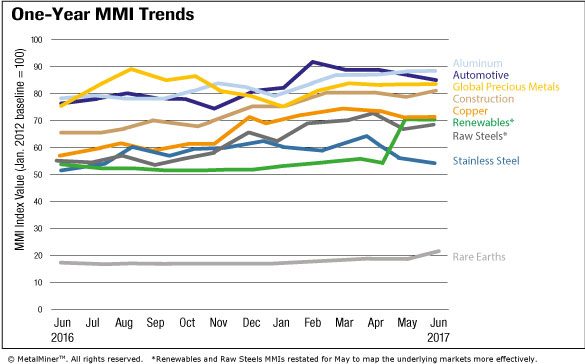 In terms of policy, several things happening around the world will have macroscopic effects on these industries.
Domestically, the Trump administration’s ongoing Section 232 investigation into steel imports will have ripple effects at home and abroad (namely in the Chinese steel market).
In the U.K., the recent shocker of a parliamentary election leaves question marks regarding the way forward — is it going to be a “hard” or “soft” Brexit? Does Theresa May have the political capital to make a hard Brexit happen? It seems unlikely now, but that situation continues to develop. In terms of business and metal markets, whichever iteration of Brexit takes hold will have effects on the ways in which British companies do business with Europe.
In China, many analysts expect growth to slow in the second half of 2017 as the government aims to put the squeeze on credit growth. (Moody’s recently downgraded China’s credit rating for the first time since 1989.)
While several MMI sub-indexes did not go up or down this past month, there was still quite a bit going on in each sector. You can fill yourself in by downloading our June MMI Report, which offers all of the storylines and trends for our 10 MMI sub-indexes, presented in one convenient place.
[s3medialinksafe title=”Download the Report Here” file=”June_2017_MMI_Report.pdf” expireseconds=”300″ target=”_blank” /]