China’s Falling Steel Exports May Be a Temporary Phenomenon

In the week when the world pensively awaits the U.S.’s Section 232 judgement — a move promised by President Donald Trump during his election campaign and aimed largely at China — a recent Reuters report on Chinese steel exports makes interesting reading. 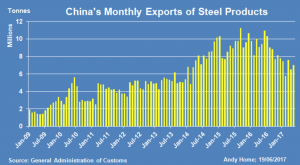 China’s steel exports have been sliding for months.

According to Reuters, China’s January-May export total was 34.2 million tons, down 26% from last year’s equivalent period and the lowest level since 2014. The year drop in export tonnage amounted to 12.1 million tons — roughly equivalent to Canada’s production over a full 12-month period, Reuters reported.

Meanwhile, profits on products like steel rebar have surged to $162 dollars per ton this month, as inventory levels have fallen and demand has remained robust (particularly from the construction sector). Investment in real estate is running at an annual growth rate over 6%, Reuters reports. Although there are fears of overheating in some regions, real estate has been stronger for longer than analysts outside the market expected.

As we noted in a piece yesterday reviewing the 232 probe, China’s share of the U.S. import market for steel products has been falling for the last couple of years, mainly due to successful anti-dumping cases. China no longer appears even in the top 10.

So, what exactly is going on in China with respect to steel production and demand? Can we take it that Beijing’s actions to tackle excess steel production have finally resolved China’s deflationary impact on global steel markets?

First, Reuters notes that China has been quite successful in permanently closing previously shuttered steel plants, as well as in in tackling older and more environmentally damaging mills. Those actions combined has resulted in the removal of some 100 million tons of capacity.

In addition, Beijing’s focus on environmental issues has hastened the closure of induction furnaces, which use scrap rather than iron ore as their input and are often labelled as producers of sub-standard products (and, hence, unapproved). Unapproved equates to illegal by Beijing — as such, their production and their closures does not figure in the normal statistics. A significant proportion of China’s rebar production came from these mills, which explains the record profits being earned by surviving state-owned manufacturers of the same products as they capitalize on the removal of these scrappy competitors.

Unfortunately, nobody expects China’s construction market to continue at the current pace and a slowdown is in the forecast for the second half of the year.  Replenishment of low inventory levels will maintain steel mill production runs for a while, but as Reuters notes, China’s mills have a notoriously poor record in adjusting output to demand. So, we should expect that as demand eases, inventorying levels will rise, prices will fall, and access production may well begin to leak through exports onto the international market.

While America’s anti-dumping legislation will largely protect that market from Chinese material, the rest of the world may find itself under pressure next year from greater availability of Chinese steel at falling prices, further fueling an already rising tide of protectionist sentiment in both developed and emerging markets.