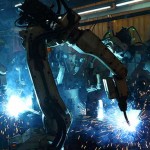 This morning in metals news, the global metal fabrication robot market is set to grow a great deal in the next four years, congressmen are asking President Donald Trump to limit the scope of any potential aluminum tariffs (stemming from the administration’s Section 232 investigation) and the president is reportedly growing increasingly frustrated with China, which could lead to — as many expect — steel tariffs.

Metal Fabrication Robot Market to Grow by CAGR of 18.51%

The global metal fabrication robot market is going to grow in a big way in the coming four years, according to a report from Research and Markets.

There is an “increase in focus by vendors to improve manipulation, navigation, cognition, and perception of metal fabrication robots,” the report states. From 2017-2021, the market is expected to grow by a compound annual growth rate (CAGR) of 18.51%.

There is growing interest from manufacturers for robot manufacturing technology. According to the report, purchasing managers around the world are looking to buy from metal fabricators which can keep prices low, even during economic downturns.

Of course, this isn’t great news for human beings who hold these manufacturing jobs, but automation is not going anywhere, whether on the manufacturing side or the usage side (for example: driverless, automated vehicles).

Congressmen Hope Trump Can Be Flexible on Aluminum

As the domestic steel and aluminum industries — and their counterparts around the globe — await the announcement of the administration’s Section 232 investigation findings, some congressmen are asking the president to limit the scope of any proposed punitive measures on aluminum imports.

According to letters obtained by Bloomberg, several congressmen have written to the administration to state their concerns about the potential effects of tariffs on aluminum imports. In letters addressed to Commerce Secretary Wilbur Ross and Defense Secretary James Mattis, the legislators argue that tariffs could increase costs for consumers and industrial users of aluminum.

One letter, signed by 44 members of the House, indicated a hope for the scope of the 232 ruling to be limited to “only products that are used for national security applications.”

Whether that will end up being the case remains to be seen. In recent weeks, other countries have expressed concern about the impending 232 rulings, particularly the European Union. EU Trade Commissioner Cecilia Malmström even said that tariffs will adversely affect the EU producers, and that the EU is considering options for retaliatory measures. Now, even U.S. aluminum companies are expressing concern about rising prices and potential supply-chain disruptions.

Bloomberg reported Tuesday that Trump is growing “increasingly frustrated” over what he perceives as China’s inaction with respect to North Korea.

That political football could find its way into the arena of commerce, as Trump is considering trade remedies against China, according to officials. According to the Bloomberg report, Trump is considering a “range of actions,” including tariffs on steel, a well-publicized option which was already on the table as part of the Section 232 investigation launched in April.

Like with aluminum, it’s unclear exactly what the Trump administration will do, even if Trump’s rhetoric indicates tariffs are on the way.