Home | Public Policy | In the Wake of Grenfell Tower Fire, Every Tragedy Has Its Lessons
Commentary

In the Wake of Grenfell Tower Fire, Every Tragedy Has Its Lessons 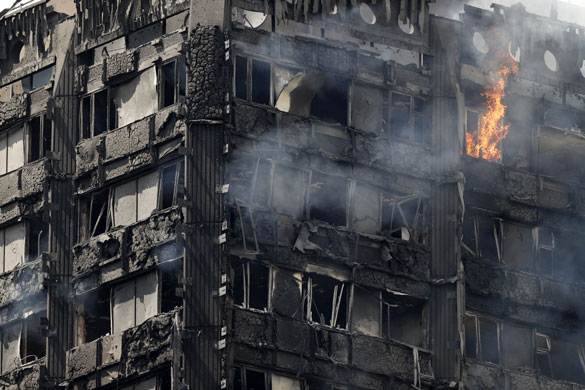 There seems little doubt and even less debate that the tragic fire at Grenfell Tower in London was, if not caused by, then certainly greatly exacerbated by the aluminum cladding on the outside of the building.

The original fire was started by an exploding refrigerator on the fourth floor of the 24-story public housing block. The residents thought they had the fire under control, but the refrigerator was positioned against an external wall. Flames then escaped out of the window and ignited flammable insulation between the building’s external aluminum cladding and the original external wall. 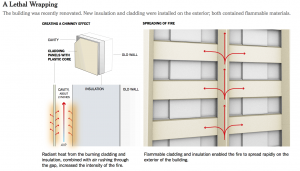 As the diagram shows, taken from an excellent evaluation of the tragedy in The New York Times, the highly combustible insulating polyethylene panels positioned between the old wall and the external cladding acted like a chimney, funneling heat and flames vertically.

Within a few minutes, what had started as a minor fire engulfed the whole building and incinerated the floors above.

Although the total number of dead may never be known — some of the occupants were illegal immigrants and, as such, unregistered — and is potentially even unknown to anyone outside of the flat they were occupying, it is believed about 79 people died.

Hard questions are rightly being asked: Why was cladding installed that included insulation that was known to be flammable?

What isn’t being as widely debated in the U.K. yet is the contents of that New York Times article highlighting that the use of such flammable materials is forbidden in the U.S. and many European countries — yet, for reasons that are not entirely clear, those materials are permitted in the U.K.

The cladding itself does not appear to be the sole culprit.

Grenfell Tower was clad, according to The New York Times, with an aluminum product known as Reynobond PE, consisting of two sheets of aluminum sandwiching an insulating core. Reynobond PE is made by Arconic (formerly known as Alcoa). Arconic has been selling Reynobond PE in the U.K. for years, but takes a different marketing approach in the U.S. and much of Europe.

In the U.S., fire regulations insist that polyethylene sandwich Reynobond should not be used in buildings taller than about 33 feet, that being the height firefighters’ ladders can readily reach. The firm’s literature clearly states that non-flammable or fire-resistant insulating materials should be used on buildings over this height.

Yet despite repeated warnings over the years, British building regulations, rather than tightening up in this area, seem to have been relaxed.

In the case of Grenfell Tower, the installation material used between the wall and the external cladding was also made of a very similar, highly combustible plastic to that used in the panel sandwich core. When the fire from the exploding refrigerator escaped out of the window, it was able to readily access this exposed installation, allowing an inferno to rapidly establish itself between the cladding and wall, and rising up 25 stories, gutting everything above the fourth floor. In the process, the cladding also caught fire, showering burning debris on firefighters and those seeking to escape the building below.

The aluminum itself is unlikely to have reached a temperature at which it would have caught alight, but with the melting point of about 660 degrees Celsius and fire authority estimates of temperatures exceeding 1,000 degrees Celsius in the upper parts of the tower, the aluminum panels will have readily melted in the heat. Aluminum does not burn until nearly 7,000 degrees Fahrenheit, or nearly 4,000 degrees Celsius, but with the panel surfaces melting it provided no protection to prevent the flammable sandwich core from igniting along with the insulation installed in the space between the panel and the wall.

Whether aluminum cladding can survive from this disaster in the U.K. as an architectural product specified on new and existing buildings remains to be seen. Even if totally fire-resistant insulation were specified, it would be a brave architect that clad a new residential building with aluminum panels in the future.

The tragedy is that the 79 deaths and the huge cost of upgrading some 600-plus similar high-rise buildings in the U.K. could have been avoided if the British fire regulations had drawn on experience bitterly learned from earlier fires in the U.S., Europe and elsewhere.