Defining the root cause of Britain’s predicament is not as simple as a sweeping “foreign competition” argument. But there’s no doubt that is part of the problem, as Britain’s steel industry has been decimated over the last 25 years. 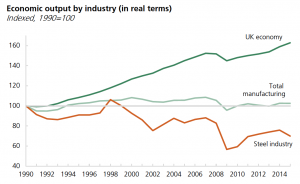 In line with most European producers, surviving U.K. steelmakers have had to move up the value chain in order to remain profitable. Inevitably, however, the market for more value add, niche product areas is smaller than the bulk commodities end of the market.

The U.K., in turn, is a relatively small consumer of steel products, as medium to heavier industry has also declined over the years. As a result, the U.K. has lost the ability to make some of the grades or forms necessary for more demanding or critical applications.

Last year the government was embarrassed to admit at a project start steel-cutting ceremony that the steel being used by BAE Systems to build the new Trident class of ICBM capable nuclear submarines was not British, but French. Even with the program of three vessels, said to cost £41 billion and to stretch over many years of construction, it was not cost-effective to create the production capability in the U.K.

Now, a Telegraph article paints an equally shameful scene at a similar steel-cutting ceremony, when it was revealed that the steel to be used on the Navy’s new Type 26 Frigate program would be from Sweden.

According to the article, each of these ships will require about 4,000 tons of steel, with only about 35% of this amount coming from U.K. steelmakers (although it will amount to some 50% by value). The problem this time is not grade, as in the case of the French steel for the Trident submarines, but the thin gauge/grade combination. No one in the U.K. can now make the thin, high-strength grade of steel required for all eight of the vessels in the Type 26 Frigate build program.

Britain cannot really argue that the loss of steelmaking in these areas is a threat to national security, as President Donald Trump’s call for action under Section 232 of the Trade Expansion Act of 1962 is designed to address. France and Sweden are allies of the U.K. and will no doubt prove reliable suppliers. However, the situation does underscore how the decimation of capability, often by simple neglect to support, leaves countries vulnerable in terms of material supply for crucial programs at the heart of the nation’s defense.