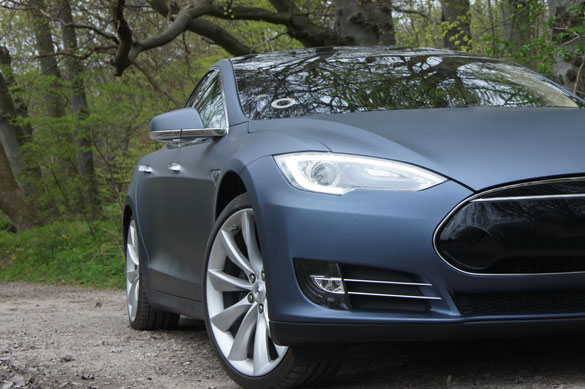 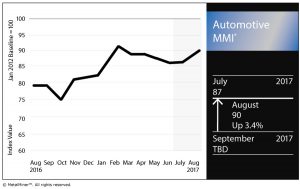 The sub-index reached the 90-plus threshold for the first time since the February reading, when it jumped to 92.

Although automotive sales have fallen off the record pace seen in 2016, the basket of metals in this sub-index posted strong price gains throughout July. U.S. hot-dip galvanized (HDG) steel rose 1.3%, while U.S. platinum and palladium bars posted increases of 2.3% and 3.4%, respectively.

U.S. Automotive Sales Down From 2016 Figures

General Motors sales fell 15.5% in July compared with July 2016, according to Autodata Corp sales data released Tuesday. In the year to date, GM’s sales are down 3.9% compared with the same time frame in 2016.

GM is not the only automotive brand to see lagging U.S. sales this year.

Even Tesla, riding high off the hype from the forthcoming Model 3, saw its July sales fall 5.2% below its July 2016 figures. Even so, Tesla’s year-to-date sales are 34.7% higher than its sales for January-July 2016.

Honda also posted sales drops in July (1.2%) and in the year to date (0.2%). Volkswagen, still dealing with the PR quagmire of Dieselgate, saw its July sales fall 2.6%, although its sales are up 5.9% for the year to date.

The automotive market is just one industry sector that could be affected by trade measures that could come about as a result of the U.S. Department of Commerce’s Section 232 investigations into steel and aluminum imports.

Of course, those investigations have yet to reach a resolution.

Last week, President Donald Trump told the Wall Street Journal that “we don’t want to do it at this moment,” in reference to trade actions involving steel imports.

As electric car technology continues to advance, so, too, is consumer interest.

One model drawing consumer interest in the forthcoming Tesla Model 3. According to a report in CNNMoney, the Model 3, billed as a more affordable electric vehicle option, is garnering more than 1,800 net reservations each day. Tesla CEO Elon Musk told analysts Wednesday that the total reservations for the new model had reached around 455,000, including cancellations.

In addition to electric-powered vehicles, automation is also considered the wave of the future.

But what about automated trucks delivering goods across the highways of America?

According to a report in Material Handling & Logistics, that possibility might be a reality down the road, but not necessarily in the near future.

The report states that in a recent ABI Research survey, 44% of respondents were not aware of the use of automated vehicles for transport.

That doesn’t mean automation isn’t picking up steam overall. The study notes that 30% of all U.S. companies plan to incorporate robotics into their operations next year.

On the LME, primary copper rose by 7.8% to $6,381/metric ton. The metal was boosted to a two-year high, primarily a result of a weaker dollar and the possibility of increased Chinese demand, Reuters reported.

PREVIOUS POST:
This Morning in Metals: A JSW-JFE Partnership in India?
NEXT POST:
Construction MMI: Sub-Index Builds Up to 83