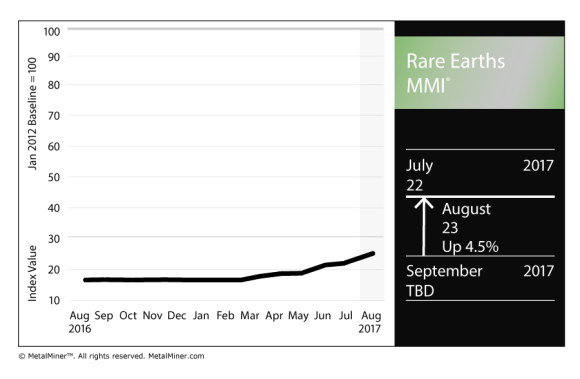 The Rare Earths MMI continued its steady climb back up toward 2015 levels, hitting 23 for our August reading. After hitting 29 in April 2015, the sub-index fell as low as 16 last year before slowly climbing back up this year with an uptrend that began in March.

Most of the heavy hitters in the sub-index posted price increases, namely Chinese neodymium oxide, which rose a whopping 21% in July.

However, rare-earth metals can be found elsewhere, including Australia. A rare-earths mine containing dysprosium was opened in western Australia late last month, the ABC reported.

Western Australian Premier Mark McGowan told the ABC the mine was the first of its kind outside of China. Mining has already begun at the site, according to the report, and approximately 60,000 tons of ore per year are expected to be extracted during the pilot stage of the project.

South Africa is another player in the rare-earths market. Canorea wrote last month: “South Africa could play a strategic role in rare-earth metals supply.  The Steenkampskraal mine claims to have the highest grades of rare-earth elements in the world. Moreover, the mine had previously been in operation between 1952-1963, according to its website, and appears to be putting in place all of the equipment and permits needed to bring the mine to production. Rising prices will help. Nevertheless, China remains the global price setter for rare earths.”

But, back to China. The price of these rare-earths metals, which are used in a wide range of technologies, are expected to rise.

According to the Nikkei Asian Review, China is looking to curtail supply by focusing on enforcing environmental rules and targeting illegal mining operations.

Also per the Nikkei Asian Review, the price of neodymium hit $65 per ton, marking the first time it had eclipsed the $60 price point in two years.

Electric vehicles are among the applications for rare-earth metals. As technology improves and more affordable electric models hit the market, the demand for these metals can only be expected to rise.

Meanwhile, in the U.S., the CEO of the only remaining rare-earths mine in the country urged the White House to nationalize the mining operations, located in Mountain Pass, California. Whether that can or will happen remains to be seen, but any effort to revive the operation faces significant challenges from China’s overwhelming dominance of the market.

Chinese rare-earth metals posted price increases almost across the board in July.