The Renewables MMI jumped 6.9% to 77 for our August reading, as prices jumped for nearly every metal in the renewables basket sub-index.
Benchmark Your Current Metal Price by Grade, Shape and Alloy: See How it Stacks Up 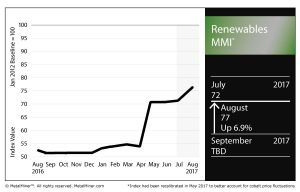 Of eight metals listed in this sub-index, seven posted price jumps last month. Steel plate from Japan, Korea, China and the U.S. jumped up, as did Chinese neodymium, silicon and cobalt.
The lone metal to fall this past month was U.S. grain-oriented electrical steel (GOES) coil, which fell  2.8%.
It was a much stronger July for this basket of metals than June was, when only four of the seven metals moved up in price (Chinese steel plate, neodymium, cobalt cathodes and silicon).

As mentioned earlier this week, Reuters reported rising cobalt prices have forced battery makers in Asia to consider alternatives — namely, nickel.
According to the report, makers of lithium-ion batteries are looking to add more nickel to their battery formulas instead of the increasingly costly cobalt.
As the report notes, electric vehicle demand is set to grow significantly in the coming years. As such, automakers will be looking to cut their production costs. According to Reuters, the price of cobalt has doubled over the last year, a product of high demand and supply shortage.

Speaking of supply, most of the world’s cobalt is mined in the Democratic Republic of Congo, according to the United States Geological Survey (USGS). According to USGS data, an estimated 66,000 metric tons of cobalt were mined in Congo in 2016 — or 54% of the 123,000 metric tons mined worldwide. China came in second last year of cobalt mined (7,700 metric tons), followed by Canada (7,300 metric tons).
However, the unstable political situation in Congo could continue to affect supply, making the metal even pricier. Political unrest recently led to a wave of bloodshed in the country, sparking fear of a return to the civil wars of the 1990s, The Guardian reported.
This is all without even getting to the ethical concerns present in the Congolese cobalt mining world. As noted by numerous media reports, significant chunks of mining revenue tend to go missing via corruption linked to President Joseph Kabila. All in all, the rising demand in cobalt has not benefited the Congolese people. A 2015 IMF report showed the country was experiencing significant economic growth, but poverty reduction lagged behind.
On top of all this, the conditions for Congolese cobalt miners add another ethical concern to the mix, one which big multinational brands will have to answer to with respect to their supply chains. For example, a Sky News report revealed workers as young as 4 working in the Congolese cobalt mines in deplorable conditions.
Free Sample Report: Our Annual Metal Buying Outlook
While the status of cobalt on the marketplace is obviously not the most important takeaway from the grim situation in the DRC, cobalt production has fallen this year amid the unrest, The Guardian reported, leading to a 90% rise in the price of the metal and a peak of $61,000/ton in July.