With the oil price under pressure from excess supply and a growing percentage of the North American market’s oil and natural gas demand being met from domestic sources, the last thing you would expect is a surge in oil and natural gas tanker construction.

But according to the Financial Times, that is exactly what Hyundai Heavy Industries (HHI), the world’s largest shipbuilder, is experiencing.

HHI has reported a 70% jump in first-half operating profit, to Won 315 billion ($280 million) in the first six months of this year from Won 186 billion a year earlier.

Even more impressive is the surge in the order book.

The group won orders to build 81 vessels worth $4.5 billion so far this year, compared with 16 vessels worth $1.7 billion in the same period last year led by a rebound in oil tankers and gas carriers, the Financial Times reports. 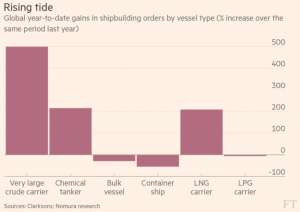 It may be counterintuitive that shipping demand is surging so dramatically. Demand is positive but hardly growing robustly.

One explanation is as older vessels are retired for oil storage, stimulated by the current relatively low oil price environment, demand is increasing for more efficient, new vessels to replace them.

Apparently, both Samsung Heavy Industries and Daewoo Shipbuilding and Marine Engineering are going through a similar uptick in demand.

Samsung Heavy’s first-half operating profit swung to Won 48 billion from an operating loss of Won 277.6 billion a year earlier. Daewoo Shipbuilding is also expected to report an operating profit of up to Won 800 billion for the first half after narrowly avoiding bankruptcy in April on a $2.6 billion bailout by state-run lenders, the Financial Times reports.

For the big three, this turnaround must be very welcome after years of losses and poor sales. The news will also bolster Korean steelmakers and the rest of the shipbuilders’ supply chain.

The only country building much the last few years has been China, a shipbuilding market served almost exclusively by its domestic steel mills.

However, Korean steel mills have a well-established positon as producers of high-quality, shipbuilding-grade steel.

According to Clarksons, the Financial Times reports new orders for ships worldwide rose more than 40% in the first half of this year, with South Korea taking  one-third of them, closely trailing behind China. Continued strength into next year will depend on global growth continuing in a broadly positive direction and the longer-term trend of greater reliance on liquefied natural gas for power and chemicals feedstock.

Liquefied natural gas shipbuilding construction has been a speciality of the Korean shipyards and should remain a core offering, despite growing competition from China’s shipyards.

PREVIOUS POST:
Global Precious MMI: PGMs Drive Strong July
NEXT POST:
Nickel Seems to Have Found a Floor — But Has It Found a Ceiling?