Gold prices rallied during the first three months of 2017 on the heels of the presidential election and a weaker U.S. dollar.

However, gold prices showed some weakness during March and have traded sideways since then, with an average price of $1,250/ounce.

Gold prices have not been able to surpass the resistance level of $1,300/ounce, which would ensure the metal retain its bull market status.

In July, however, gold prices increased together with other base metals and commodities. 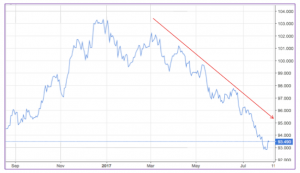 The U.S. Dollar weakness in 2017. Source: MetalMiner analysis of TradingEconomics

Gold prices received a lift from a weaker U.S. dollar.

A bearish U.S. dollar contributes to rising gold prices. The U.S. dollar is currently at its lowest level in a year and is close to its support level. 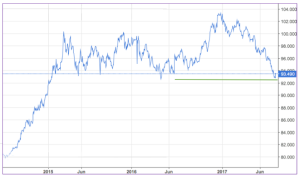 The U.S. dollar could rebound from this support level and recover — or it may continue its sharp downtrend and show weakness. Gold prices could remain supported by a weaker dollar.

The S&P 500 has continued its uptrend since 2016. The index has reached an all-time high. The rising stock market may have kept a lid on gold prices this year.

However, the increase in stock markets has shown low volatility.

We may be in the calm before the storm. 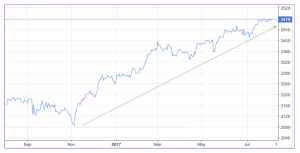 What this means for metal buyers

Gold prices have lost steam and have traded sideways since March (with the exception of July’s bullish move).

A stronger U.S. dollar could drive gold prices down again. The opposite also remains a real possibility.

Buying organizations may want to watch the U.S. dollar closely.