Our August MMI report is in the books, and it paints a positive picture for a wide range of metals.

In our June MMI, four sub-indexes posted no movement. The July MMI? Only one stood pat.

Nine of the 10 sub-indexes posted positive movement, with the remaining sub-index (GOES) dropping. 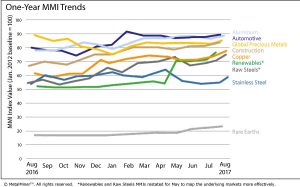 As Irene Martinez Canorea wrote Friday, there’s a bullish outlook behind metals like aluminum, copper and zinc these days. Can they continue that momentum throughout the rest of the calendar year? That remains to be seen, but they’ve certainly been on an uptrend.

Speaking of aluminum, the U.S. Department of Commerce last week made a preliminary determination in a countervailing duty investigation of Chinese aluminum foil, declaring that the products are unfairly benefiting from Chinese government subsidies. The decision was met with applause from the U.S. aluminum industry, particularly the Aluminum Association.

“The association and its foil-producing members are very pleased with the Commerce Department’s finding and we greatly appreciate Secretary Ross’s leadership in enforcing U.S. trade laws to combat unfair practices,” said Heidi Brock, President and CEO of the Aluminum Association, in a prepared statement.

What could come of the investigation? Duties as high as 81% could be slapped on Chinese aluminum foil.

In other investigations, the Department of Commerce’s Section 232 investigations of steel and aluminum imports remain pending. The investigations don’t appear to be at the forefront of the Trump administration’s agenda right now. Furthermore, the deadlines for Secretary of Commerce Wilbur Ross to present President Donald Trump with policy recommendations don’t hit until January.

Of course, things can change quickly — but, for now, a final ruling on trade policy regarding steel and aluminum imports possibly won’t materialize for a while.

You can read about all of the above and much more in our August MMI report, which you can download below.