Unlike the steel mergers of the mid-noughties, the mergers currently in the news are born out of weakness, not strength, a recent Financial Times article suggests.

According to the piece, profitability among the continent’s steelmakers plunged from a peak in the third quarter of 2008 — when each ton shipped delivered on average €215 in earnings before interest, tax, depreciation and amortization — to just €46/tonne in the first quarter of 2016, according to calculations by UBS.

The figure has recovered since to about €83/tonne in the first quarter of 2017, but at the cost of 86,000 job losses since the financial crisis and years of losses contributing to the bankruptcy of the continent’s largest steel production plant, Ilva, in Italy. 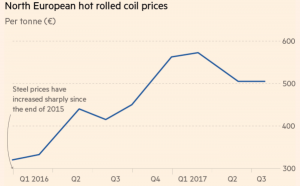 Despite years of suboptimal capacity utilization, there has been limited rationalization of production continentwide, with governments fiercly opposing job losses in their backyard and steelmakers hoping the other guy will make the cuts. Even Ilva is now being taken over by ArcelorMittal rather than closing completely, and following a major investment will be back in production next year. 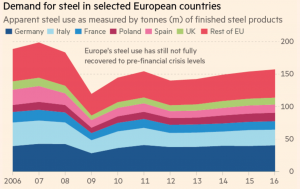 Although the industry acknowledges Europe will never need as much steel as it once did, ArcelorMittal is quoted as saying the industry is looking to governments to do more to stem imports from Russia and China, and facilitate the planned and phased closure of persistently loss-making plants. Less foreign competition and more consolidation is the agenda in the hope fewer more-consolidated steelmakers can achieve greater clout with buyers in a more constrained market, forcing through higher prices. 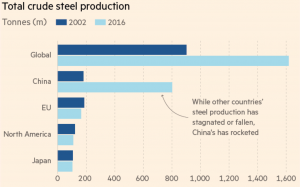 When ArcelorMittal’s takeover of Ilva is complete, the combined entity will control some 30% of European flat-rolled steel production, up from 26.5% for ArcelorMittal now. While Tata Steel’s proposed and much-delayed merger with ThyssenKrupp’s steel division — currently Europe’s second-largest steel producer — would raise their combined market share for hot-rolled flat products to over 20%.

Steel prices are already up nearly 60% from the bottom in 2015 on the back of improved recovery in steel demand and a gradual increase in anti-dumping legislation restricting some types of steel imports into Europe. Producers would like to see this go a lot further, of course, but consumers are fighting to keep the import market open, fearing — with some justification — that more action will reduce competition and result in significantly higher prices.

For the first time in years, steelmakers at least seem to have a plan and are actively pursuing it. Whether that plan is to the eventual benefit or detriment of consumers remains to be seen — but a healthier domestic steel industry must certainly be advantageous to all.