U.S. Looks to Change Tune of KORUS FTA in Talks with South Korea 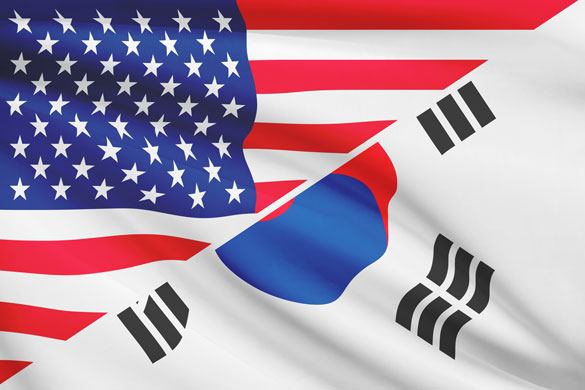 The North American Free Trade Agreement (NAFTA) isn’t the only trade deal the Trump administration is eyeing for changes.

Like NAFTA, the trade deficit is a central talking point for the U.S. In a statement from the Office of the USTR, Lighthizer summarized the administration’s goals with respect to trade with South Korea.

“The United States and Korea have an important economic relationship,” Lighthizer said in the prepared statement. “Unfortunately, too many American workers have not benefited from the agreement. USTR has long pressed the Korean government to address burdensome regulations which often exclude U.S. firms or artificially set prices for American intellectual property. This negotiation offers us an opportunity to resolve these and other barriers.”

“Since KORUS entered into effect, U.S. goods exports have decreased while the trade deficit overall with Korea has nearly tripled,” Ambassador Lighthizer continued. “American service exports have seen virtually no growth in the past four years. President Trump is committed to substantial improvements in the Korean agreement that address the trade imbalance and ensure that the deal is fully implemented.”

According to a release on the Korean Ministry of Trade, Industry and Energy website last Wednesday, Kim said no decision had been reached regarding the next step in the discussion.

“The Trade Minister said the Korean representatives had proposed a joint study to examine the effects of the trade pact before starting talks on a revision of the deal, and will await the USTR’s review of the proposal and response before deciding how to proceed,” the release said.

The U.S.’s trade deficit with South Korea has ballooned since implementation of KORUS in March 2012.

In 2011, the last full year before KORUS went into effect, the U.S. had a $13.2 billion trade deficit with South Korea, according to U.S. Census Bureau data.

The automobile sector is the source of much of the deficit, according to the USTR release. In 2016, 90% of the $27.6 billion deficit came from the auto sector alone.

As for metals, South Korea is a leading steel exporter to the United States, as a recent American Iron and Steel Institute (AISI) report on steel imports showed.

Although South Korea’s steel exports in July to the U.S. dropped by 13% from June totals, South Korean steel still led the way with 337,000 net tons exported — ahead of Turkey, Germany, Japan and Taiwan.

South Korea is also the largest supplier through the first seven months of 2017, sending nearly 2.3 million net tons to the U.S., which is actually down 4.5% year-over-year.

While China has been the focus of the Trump administration’s Section 232 investigation into steel imports, countries like South Korea could also be impacted if Trump opts to slap tariffs on steel imports.

As our Stuart Burns wrote last week, it might be a faulty assumption to think that the trade imbalance is the direct result of the free trade agreement.

“Bilateral trade has surged since KORUS, as the Korean-U.S. trade deal is known, was implemented five years ago,” Burns wrote. “Although there is a trade imbalance, the reality is no two countries will have exactly balanced trade. Balances have more to do with relative competitiveness than a rigged system.”

Whatever happens to KORUS, it appears the South Korean government is preparing to pursue alternative economic avenues.

Following a meeting on the country’s exports last Thursday, a release posted on the Ministry of Trade, Industry and Energy website the following day read: “Trade Minister Kim, who presided the meeting held in the Korea Trade Insurance Corp. (K-sure), said that the Korean government will actively respond to trade protectionism, strengthen economic cooperation with emerging markets, and help boost the link between trade and industrial development.”