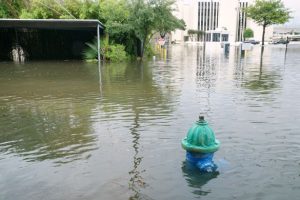 Hurricane Harvey touched down in Texas late last week — in the ensuing days, thousands were displaced as record rainfall of more than 50 inches blanketed some areas of Houston (the fourth-most populous city in the U.S. with a population of about 2.3 million).

According to a USA Today report citing preliminary research from the firm AccuWeather, Harvey could become the costliest disaster relief effort in U.S. history, with a potential price tag of $160 billion.

It should of course be noted that, before anything else, the natural disaster’s human impact is of utmost importance. The New York Times reported the death toll has hit at least 30, according to Texas officials.

In addition to widespread flooding, property damage and displacement suffered by residents in the hurricane’s path, Harvey has also left an economic impact that will be felt for the foreseeable future.

Among other things, metals prices, oil prices and shipping have all been, or will be, impacted by Harvey.

The Port of Houston is one of most important trading locations in the U.S. As a result of Harvey, the port was completely closed as of last Friday. According to the Port of Houston website, it will remain closed on Thursday.

“We will continue to work alongside local agencies and the USCG to determine when operations can safely resume,” an alert on the Port of Houston website read Wednesday.

So, a total shutdown of the port is a big deal.

On the export side, 3% of total container volume exported last year came from steel and other metals (27,127 TEUs).

Meanwhile, the Port of Corpus Christi, the fourth-largest port in total tonnage, was also closed as of Tuesday.

The affected areas have an immediate need for supplies of all kinds, but transportation modes are at a general standstill for the moment.

Much of Houston has been hit by record rains, leading to flooding and stranding locals without food or supplies.

Although it won’t happen overnight, eventually the area will begin to rebuild in the wake of the damages caused by Harvey.

According to a report on the Nasdaq website, Houston receives between 30% and 35% of all U.S. steel imports, making it a pivotal point of access.

In the wake of Harvey, some U.S. steel companies saw their stocks rise. According to the report, shares of United States Steel Corporation jumped by over 2.5% on Tuesday, while Olympic Steel rose more than 1.5%.

Nucor and AK Steel Holding Corporation both saw their stock prices rise by over 0.5%.

However, it’s still early to determine the true damage to the steel industry caused by Harvey.

According to a Platts report, Harvey could have a similar impact to that of 2012’s Hurricane Sandy, particularly with respect to steel scrap.

In addition to the disruption of port activity, rising water levels have taken a bite out of freight service.

As a result, a rise in trucking rates can be expected, according to freight analyst firm FTR Transportation Intelligence.

“Look for spot prices to jump over the next several weeks, with very strong effects in Texas and the South Central region,” said Noel Perry, a partner at FTR. “Spot pricing was already up strong, in double-digit territory. Market participants could easily add 5 percentage points to those numbers.”

According to Steel Market Update, FTR predicted 10% of freight activity will be disrupted over the next two weeks.

As a result of an overall glut in global production, gas prices have come down significantly since 2014, when the gas price in some metropolitan areas exceeded $4 gallon.

According to AAA, about one-quarer of Gulf Coast refining capacity was taken offline, according to forecasts by Oil Price Information Service (OPIS), which equated to about 2.5 million barrels per day.

“Despite the country’s overall oil and gasoline inventories being at or above 5-year highs, until there is clear picture of damage and an idea when refineries can return to full operational status, gas prices will continue to increase,” said Jeanette Casselano, AAA spokesperson, in a prepared statement.

Rescue missions continue in the Houston area, as officials move residents in flooded areas to shelters. According to the Washington Post, 32,000 people have taken refuge in 231 shelters, with many volunteers need to help clean out damaged homes.

“We expect a many-year recovery in Texas, and the federal government is in this for the long haul,” said Elaine Duke, acting secretary of the Department of Homeland Security, to the Washington Post.

The damage won’t be contained to Texas, however. According to the National Hurricane Center, Harvey touched down again, this time in southwestern Louisiana at 4 a.m. today.

More than 12,400 employees from more than 17 federal departments and agencies are working together in support of the ongoing response to damages resulting from Hurricane Harvey and subsequent flooding across Texas and Louisiana, according to the Federal Emergency Management Agency (FEMA).

When all is said and done, affected communities will have a long road to recovery. Many will eventually return to homes either damaged beyond habitability or totally destroyed.

Houston is the largest U.S. market for newly constructed homes, and demand for materials used in home construction will surge as communities transition from rescue and recovery mode to begin the arduous rebuilding process.

The question is: When will that transition happen?

For now, government agencies on the ground are prioritizing the primary disaster relief effort, and it’s unclear when resources can eventually be shifted to construction.

The pipe and tube market, in particular, is well represented in the Houston area, which offices for the multinational firm Vallourec. The Port of Houston took in nearly 40% of iron and steel pipe and tube imports through the first six months of the year, according to ustradenumbers.com.

Earlier this week, the Committee on Pipe and Tube Imports sent a letter, obtained by CNBC, to the Trump administration, urging it to move forward with trade remedies in the Section 232 investigation of steel imports. According to the letter, over 60% of current U.S. demand for pipe and tube materials is supplied by foreign producers.

The request tied into the ongoing situation in Houston.

“Based on the amount of imports flooded into America now we will not be able to help rebuild Houston,” Robert Griggs, president and CEO of Trinity Products, told CNBC.

“Not one U.S. pipe company will get a lick of work in rebuilding Houston. It will all go to China. The president needs to level the playing field and make it fair. The way it is now, American steel pipe companies will lose the opportunity to rebuild Houston.”