The Automotive MMI jumped four points to 94, up from 90.

Major price jumps in the basket of metals relevant to the automotive sector, particularly copper, paced a strong month for the sub-index. 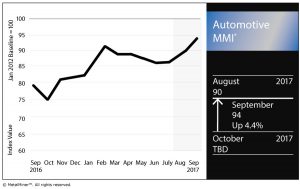 Auto sales in 2017 have trended downward, which hasn’t exactly been a surprise given the record sales figures posted in 2016. Sustaining last year’s sales totals would have been a tall task.

However, the news hasn’t been all bad.

According to Autodata Corp sales data released Sept. 1, General Motors had a good month, selling 275,326 units — a 7.4% increase from sales in August 2016. GM’s light truck sales carried the day, rising by 16.5% compared with August 2016. In the year to date, however, sales overall remain down by 2.4% compared with the same time frame last year.

Fiat Chrysler posted a 10.6% drop in sales in August compared with the same month last year, and a 7.7% year-over-year decline.

Tesla, meanwhile, albeit in much smaller volumes, posted a 6.8% sales jump in August compared with August 2016, selling 227,625 units last month. Year-over-year, however, sales are down 1.3%.

According to Reuters, GM’s sales in China were up 12% in August compared with August 2016, and its January-August sales (2.38 million vehicles) are up 0.3% compared with the same period last year.

August was also a good month for Toyota and and Honda. Honda’s August sales in China jumped 20.6% and Toyota’s jumped 13.2%, according to the report.

In addition to the large-scale humanitarian crisis inflicted by Hurricane Harvey in southeast Texas and southwest Louisiana, the storm also will have an impact on the automotive market.

As our Stuart Burns wrote earlier this week, many in the regions impacted by the storm will, eventually, need to replace their damaged vehicles — or, in some cases, some might be looking to go with models more capable of traversing through high levels of standing water.

Unfortunately, there is precedent for just this sort of sales spike on the heels of a natural disaster.

Burns wrote: “By way of a comparison, Reuters cites the experience of auto sales in New York following Hurricane Sandy in October 2012. The following month, auto sales rose 49% compared to the previous year, with all the replacement sales caused by the widespread flooding of the New York metropolitan area arising in the few months following the disaster.”

An uptick in sales in the Houston market, already one of the most robust auto markets in the country, is expected.