The Construction MMI jumped eight points for our September reading, rising from 83 to 91.
Benchmark Your Current Metal Price by Grade, Shape and Alloy: See How it Stacks Up 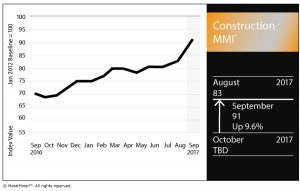 Although overall spending was down in July, the Architecture Billings Index (ABI) painted a positive picture for the month.
The ABI, put out by the American Institute of Architects, showed architecture firms continued to grow. All four regions included in the ABI — South, Midwest, West and Northeast — posted an uptick in architecture billings on the month. With a score of 50 indicating no movement, the South and Midwest led the way with scores of 53.8, followed by the Northeast at 53.6 and the West at 50.9.
Another major takeaway from the survey was the increased interest in 3D printing.
“Almost 30 percent of architecture firms have some experience with the applications of this technology,” the ABI report read. “About half of these have used it in-house on billable projects, while others are testing it, outsourcing it, or have design partners, subcontractors, or construction firms that are using the technology. When last surveyed on this topic a little over a year ago, about 20 percent of architecture firms had some involvement with 3D printing, so adoption seems to be increasing at a brisk pace.”

The Trump administration’s Section 232 probes into steel and aluminum imports have yet to be publicly concluded. As the world’s No. 1 steel importer, imposition of tariffs (or quotas) on imports would certainly have a ripple effect across all industries, including construction.
As for the North American Free Trade Agreement (NAFTA), the second round of negotiations concluded earlier this week, with the parties having reached very little in the way of breakthroughs, according to Bloomberg.
From a metal perspective, as mentioned before, an overwhelming majority of Canadian steel exports go to the U.S. As with Section 232, if Trump follows through on numerous threats to withdraw the U.S. from the 23-year-old trilateral trade deal, supply chains would be impacted.