This month’s Copper MMI beat its previous gain last month en route to a six-point increase.
The boost was primarily driven by an outperforming LME copper price, which has been seemingly unstoppable since the Chinese copper ban was announced July 24. 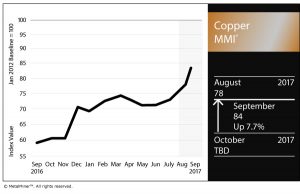 
Copper tends to correlate with the U.S. dollar. As a dollar-denominated commodity, a weaker dollar can stimulate copper buyers. The U.S. dollar has not found a floor yet, and has continued falling, reaching a two-year low now.
Commodities, on the other hand, have increased again during the first week of September. A recovery in oil prices has led the increase.
Though it’s much too early to change the commodity outlook to bullish, we did expect the correlation between commodities and industrial metals to come back to a more normal state (where they both tend to move in the same direction).
If commodities start an uptrend, then copper prices may continue their bullish rally, too.
What About China?
As China is the main commodity consumer of the world, analysts pore over Chinese economic data. Chinese economic data released during this summer resulted in better-than-expected — that is, increasing manufacturing PMI — manufacturing data. This fact, together with the government’s environmental policies, has supported base metal prices.
One curious correlation involves the Chinese Yuan (represented by the blue line below) and the copper spot price (red line). Both have moved in a similar fashion recently.

Does the Chinese Yuan serve as a guide to what copper prices might do in the future?
A deeper analysis of this and other drivers will appear in our upcoming free 2018 Annual Outlook Report, which will be released next month.
What This Means for Industrial Buyers
Even if the uptrend remains strong, we still expect high volatility for copper prices.
Thus, we expect a price retracement at some point in the upcoming months. The price retracement is normal and prices digest previous gains (in this case, a 15% increase).

To better understand how to adapt the industrial metal buying strategies based on these dynamics,  take a look at our Monthly Metal Buying Outlooks.
Free Sample Report: Our Annual Metal Buying Outlook
Actual Copper Prices and Trends
LME Copper has continued with its late uptrend this month, with an increase of 15.65%. Copper’s closing price in August was $6,448.31/metric ton.
Indian copper prices rose by 8.5% to $6.89/kilogram, while Chinese primary copper increased by 6.9% to $7.983.77/mt.
Prices of U.S. copper producer grade 102 and 122 increased 4.9% to $4.02/pound and $3.83/pound, respectively. The price of U.S. copper producer grade 110 increased 5.2%, going up to $3.83/pound.