by Irene Martinez Canorea on September 12, 2017 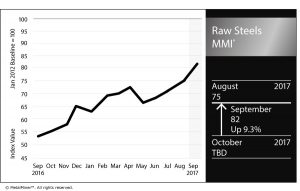 The increase came as a result of rising Chinese steel prices, which have rallied since April 2017. 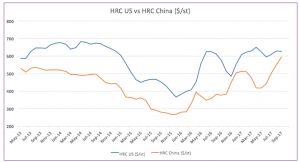 Domestic steel prices, including HRC prices, mostly held steady in August. The spread between the two has fallen by 5% since the beginning of August. Rising Chinese prices typically lead to reduced imports overall, as U.S. prices become more competitive.

Chinese steel prices have been boosted by better-than-expected demand, together with supply concerns.

Thus, Chinese economics serve as one of the most powerful indicators of the steel industry.

Chinese economic data, however, has created some uncertainty around the steel market. Even if the market expects a correction, economic indicators still reveal positive data.

Yet, some analysts believe China remains in a bubble set to explode at any time.

Steel prices commonly move together with iron ore, coking coal and steel scrap prices. Raw material price dynamics slowed in August. Both iron ore and coal prices have increased slightly, but showed some weaknesses during the middle of the month. 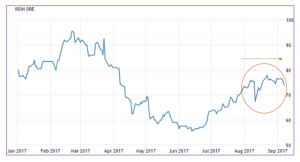 The previous uptrend for both iron ore and coal comes down to solid demand from China, as steel production has increased this year. However, July iron ore import data reveals a decrease of 8.9% from June’s reading, and 2.4% below last year’s reading. The lower import levels may signal possible future softness in the demand of this commodity. Chinese iron ore has increased by 2%, while Korean pig iron prices decreased by 0.44%. 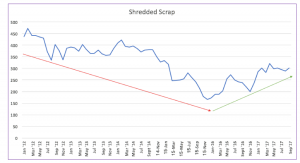 Steel momentum appears to have lost some steam.

Buying organizations should watch commodities to analyze the signals for both the short- and long-term trend.