Home | Company News | BP Makes a Big Push into Fracking Outside of the U.S.
Industry News

BP Makes a Big Push into Fracking Outside of the U.S. 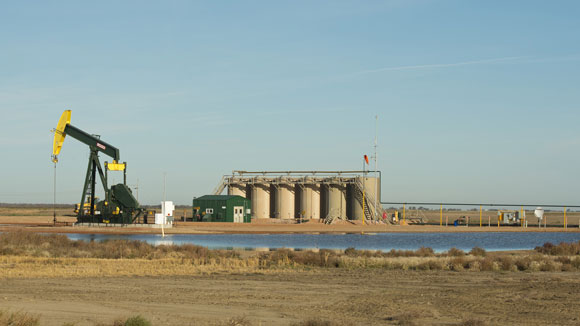 Fracking as a technology has been a spectacular success in transforming the energy landscape in the U.S., Elsewhere, however, it has failed to catch on, largely due to concerns about the environmental consequences of ground water pollution or sometimes, as in the U.K., by illogical worries about fracking causing tremors or earthquakes, concerns that environmental groups are only too keen to stoke up.

Of all places, the Middle East would not spring to mind as an obvious place for fracking to catch on. The region is blessed with some of the most extensive oil and natural gas reserves in the world, even after decades of extraction.

But that is precisely where BP’s largest new project is starting this year, according to a Telegraph report.

The $16 billion Khazzan project in Oman is set to start with around 200 wells that will tap gas three miles below the earth’s surface in extremely hard, dense rock, according to The Telegraph. BP expects the project to produce 1 billion cubic feet of gas a day and says the daily volumes could rise to 1.5 billion cubic feet in the project’s second phase, which will include an additional 100 wells.

BP has become adept in the sophisticated horizontal well-drilling and hydraulic fracturing technology from years in the U.S. fracking industry, but the Khazzan project will be its biggest unconventional gas project outside of the U.S. According to The Telegraph, it will be the largest of seven new projects the company was planning for this year.

The field is expected to produce gas for decades and is seen by BP as part of a wider move by the company to focus on cleaner natural gas rather than crude oil projects.

The project comes at what could be considered a cyclical low for natural gas.

Growth in natural gas consumption has been weak this year, growing by just 1.5% compared to a 10-year average rate of 2.3% but the market is changing with more traded gas in the form of liquefied natural gas (LNG). According to BP’s recent annual review, gas trade grew by 4.8%, helped by 6.2% growth in LNG imports and exports. Most of the net growth in LNG exports came from Australia, with a small incremental increase in U.S. LNG exports, temporarily stalled by Gulf hurricanes.

Falling global production can be explained be weak oil and gas prices. The impact has been most marked in the U.S., where low natural gas prices have stalled production growth (output dropped 2.5% last year). But output was partially balanced by rising output in Australia, where several new LNG facilities came on stream and output surged by 25%, according to BP’s estimates.

With global supplies set to increase by 30% in the run up to 2020, competition will remain intense and cap strong price rises. The natural gas and oil prices historically moved in tandem, but a disconnect occurred after the financial crisis when natural gas prices collapsed but oil recovered, as this graph from MacroTrends — also shown below — shows. 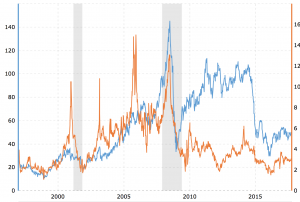 That disconnect largely reversed in 2015 when Saudi Arabia and OPEC shot themselves in the foot trying to kill off U.S. shale frackers, only to stimulate innovation and make them more competitive, not less.

BP’s venture in Oman will no doubt pay off. The geology is complex and the depth at 3 kilometers is considerable, but BP, if nothing else, is highly skilled at drilling. In addition, the natural gas market has considerable scope for growth as economies all over the globe transition from coal to less polluting fuels. Nuclear is not proving competitive, and only Russia and Brazil have managed to increase their hydropower in recent years.

Natural gas may not be a renewable, but it’s the natural choice for competitively priced power supply as the flexibility it affords helps balance the less certain availability of renewables.

PREVIOUS POST:
This Afternoon in Metals: Former Metals Trader Indicted For Alleged Price Rigging
NEXT POST:
Robots Are Coming — How Do We Manage That?