Home | Public Policy | Robots Are Coming — How Do We Manage That?
Industry News

Robots Are Coming — How Do We Manage That? 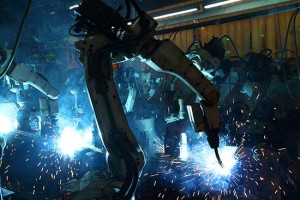 But when Gates suggested earlier this year that governments should tax new robot “employees,” just like they do human employees, socialists everywhere picked up the idea as a way of mitigating or resisting the perceived onslaught from such new technology on workers’ jobs.

Gates raised the idea in an interview with Quartz in February.

“Right now, the human worker who does, say, $50,000 worth of work in a factory, that income is taxed and you get income tax, social security tax, all those things, if a robot comes in to do the same thing, you’d think that we’d tax the robot at a similar level,” he said.

Corbyn actively proposed such a tax at his party’s annual conference this week in the U.K., saying the application of such a measure would spread the benefits gained by ”greedy” employers exploiting advanced technology to reduce wage bills.

Not surprisingly, such attitudes have earned Corbyn and his socialist allies the label of Luddites (the bands of English workers who destroyed machinery, especially in cotton and wool mills, in the early 1800s, believing such technology threatened their jobs).

But some advanced economies have already adopted the concept and many others are actively considering it.

According to The Telegraph, South Korea will limit tax incentives for investments in automated machines as part of a newly proposed revision of its tax laws. It is hoped the policy will make up for lost income taxes as workers are gradually replaced by machines, as well as filling welfare coffers ahead of an expected rise in unemployment, The Telegraph reported, quoting the Korea Times.

That is probably an easier approach to implement than an income tax. Robots don’t earn an income and assessing their cost would be fraught with difficulty, as would defining what is a robot and how you differentiate between a robot and a tool, for example, as many automated tools blur the lines between the two.

Most jobs will not be replaced by robots, but parts of the job will be augmented by robots or by artificial intelligence. According to a McKinsey global report, quoted by a separate article, the proportion of roles that could be entirely replaced by automotive technology is only about 5%, but adds “Almost every occupation has partial automation potential, as a proportion of its activities could be automated.”

How do you tax that? 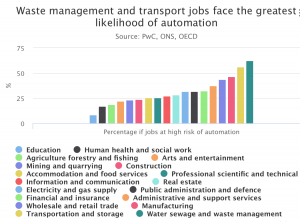 Supporters of automation argue that taxation would discourage innovation and slow down productivity growth — a problem for economies all over the world, but particularly mature economies since the turn of the century. Lower productivity would hurt all workers, as it would stifle wage growth, which can only be achieved on the back of long-term productivity growth.

Expect more of the same as automation spreads across industries in the future. The current White House administration will find itself split between supporting its big business backers and responding to its core supporters’ concerns. It will be interesting to see which way it goes.

PREVIOUS POST:
BP Makes a Big Push into Fracking Outside of the U.S.
NEXT POST:
India Drives Toward Electric Vehicle Goals