The Automotive MMI dropped for the first time since June, falling one point for an October reading of 93. 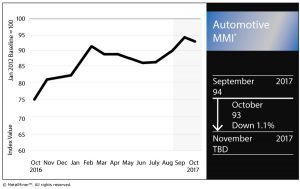 Much of the automotive basket of metals was stuck in neutral this month, but a few did show some notable movement. U.S. HDG steel dropped 1.7% and LME copper, one of the darlings of August, dropped 4.2%.

“The Chinese environmental campaign has heavily impacted lead,” Martinez Canorea wrote. “According to research group Antaike, 80% of illegal secondary smelters have been shut down during the second half of 2017. China has also lost an important source of raw materials from North Korea due to its commitment to international sanctions.”

One tidbit worth noting is the relationship between palladium and platinum. As of Oct. 1, palladium closed higher than platinum.

The last time that happened? Sixteen years ago.

According to a report by Kitco News, however, many analysts don’t expect palladium’s dominance over platinum to last.

The report attributes the price dynamic to a rise in demand in gasoline-powered vehicles and platinum’s fall alongside gold.

“Palladium is benefitting from its inclusion in catalytic converters in gasoline-powered vehicles, which is expecting robust growth from the shift from diesel engines following the 2015 Volkswagen emissions-rigging scandal, and hybrid electric vehicle demand,” according to a research note from commodities broker SP Angel quoted by Kitco.

After surging throughout the summer and hitting three-year highs, copper has been backsliding of late.

As of Oct. 1, LME copper dropped from the previous month’s closing price by 4.2%. The metal, often cited as a global indicator of economic health, lost steam in September like a number of other base metals, as Martinez Canorea wrote on Tuesday.

After a booming August, copper slowed down in September.

“Copper has retraced and the general downtrend has slowed down this month. However, the CRB commodities index has increased, something we had suggested might happen and something that signals a potential bull run,” Canorea wrote.

In U.S. auto sales, light trucks continued to be a popular option for buyers. In the year to date, over 8 million units have been sold in the U.S., which is up 4.4% from the same time frame last year, according to sales data released Tuesday by Autodata Corp.

In short? Trucks continue to be in.

It wasn’t a great month for Fiat Chrysler. September sales dropped 9.7% year-over-year. In the year to date, the automaker’s sales are down 7.9%.

A number of other automakers boasted strong September 2017 sales figurers that raced past September 2016 sales.

Toyota (14.9%), Honda (6.8%), Nissan (9.5%), Volkswagen (22.8%) and Mitsubishi (17.2%) all had solid September year-over-year increases. In the year to date, all five of the aforementioned automakers have exceeded sales compared with the same time frame of last year — Volkswagen posted the largest year-to-date jump of that group at 7.8%.

According to the most recently available sales data from the Chinese Association of Automobile Manufacturers (CAAM), August automotive sales in China were up 5.3% year-over-year.

Volvo was among the big winners in China in September. Volvo’s September global sales rose 11.2% year-over-year. In China — Volvo’s biggest market — sales rose a whopping 29.8%, according to a company release. From January-September, Volvo’s Chinese sales are up 29.9% compared with the first three quarters of 2016.

Meanwhile, our Stuart Burns wrote about an announcement that could represent the rise of the electric vehicle (EV) in China, a shift that has massive implications for the automotive world.

China, the largest automotive market in the world, moving toward the EV constitutes a significant development, to say the least.

Burns covered the recent announcement from Beijing outlining the government’s plans to move toward EVs, as the country — and the world — prepares for the phaseout of vehicles powered by fossil fuels. The U.K. and France have made similar announcements this year, setting long-term goals to ban the sales of gas and diesel cars by 2040.

India, too, announced a push toward electrification earlier this year, with an ambitious goal of selling only electric vehicles by 2030.

For now, of course, these are merely government statements — actual implementation of the processes necessary, in both the public and private sectors, to reach these goals is another story entirely.

As for automakers, GM announced Monday its plans to move toward an all-electric fleet.