The Rare Earths MMI dropped two points for our October reading, falling from 24 to 22. 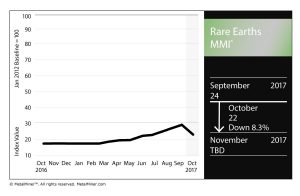 The heavier hitters in this basket of metals — which is dominated by China — posted price drops.

The rare earths sector is already a volatile market — they are rare materials, after all — but Chinese efforts to curb illegal mining have also introduced a supply-side effect on those prices.

China, which overwhelming dominates the global rare earths market, has worked to cut down on supply, which has had a supporting effect on prices.

According to the Nikkei Asian Review, neodymium hovered around $95 per kilogram as of mid-September, a 90% increase from a year earlier and up 80% from the start of the year. Terbium was around $600, up 36% from November last year.

Rare earths, which are used in things like cellphones and computers, are also needed for the production of electric vehicles (EVs). As demand grows for EVs, so too will demand for rare earths. This drive comes governments around the world have set long-terms goals to phase out vehicles powered by fossil fuels, with Beijing’s recent announcement about its own goals potentially presenting a significant impact on the global automotive and energy sectors.

Speaking of EVs, one rare earth miner hope to play a big role in their rise.

Martin Eales, chief executive of Rainbow Rare Earths, said the mining company hopes to start producing concentrate by January in Burundi, according to a report in The Telegraph last week.

The company is counting on the rise of EVs to fuel demand for metals like neodymium and praseodymium, which the company mines, according to the report.

Elsewhere, some are pondering the role old coal mines might have to play in the mining of rare earths.

U.S. Energy Secretary Rick Perry, during a visit to a Pennsylvania mine, talked about anthracite coal as a source for rare earth materials, according to a report by the Pittsburgh Post-Gazette.

As the article states, if researchers can find a way to extract the rare earths contained in the waste rock of coal mines like the one Perry visited, that could be a veritable gold mine — pun intended — for the industry.

Furthermore, if U.S. coal mines can be effectively repurposed in this way, China’s dominance of the rare earths market could possibly be challenged, to an extent.