The Renewables MMI saw a one-point drop for the month, as a number of the metals in the basket trended slightly downward. 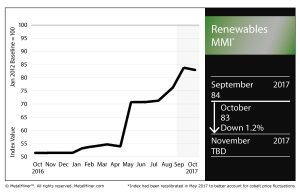 In rare and minor metals, Chinese neodymium fell 4.3%. Chinese silicon also fell, as did cobalt (both by 1.0%).

The growth of renewable energy is undeniable — the question continues to be not “if,” but “when.”

Renewable energy is expected to grow significantly in the coming five years.

According to the International Energy Agency, renewable electricity will grow from 23% in 2015 to 30% in 2022. Renewable heat, meanwhile, will rise to 11% from 9%, and biofuels in road transport will grow by a percentage point to 5%.

Already, the public and private sectors are being transformed by a push for cleaner energy.

From the government side, a number of nations have made pledges to phase out or eliminate vehicles powered by fossil fuels. The U.K. and France have set a 2040 target date for that goal, while India has set an even more ambitious goal of 2030 (our Sohrab Darabshaw wrote about that last Monday).

As the largest automotive market in the world, China’s recent announcement that it too would consider pursuing similar goals could have a serious impact on the drive toward electric vehicles (EVs), as our Stuart Burns expanded upon last month.

According to the report, there were 17 projects under construction that will collectively see $2.3 billion invested (as of the end of June of this year). Now, investment is just investment — those projects, and others like them around the world, have to prove viable for that investment to mean anything. With that said, innovation and implementation can’t happen without investment in the first place, so it’s a good sign for the industry that money is being put into its development (even if it might not have big short-term returns).

Elsewhere, Platts reported on the rise of renewable electricity in the European Union. For example, prices for wind energy have fallen dramatically as competition has intensified — by 50% compared with the previous two years, Platts reported.

China’s recent announcement regarding its own green-energy ambitions has significant implications for the global energy scene, particularly the automotive market. As the world’s largest automotive market, China’s governmental directives have a powerful hand in directing a large share of global demand.

So, by announcing intentions to possibly put a ban on gas and diesel vehicles — as a way to alleviate pollution throughout China — the competition within the EVs industry will further intensify.

As with capacity cuts to production of aluminum and steel, however, many around the world will be taking a wait-and-see approach with respect to Beijing’s recent announcement. Whether China’s words on this matter will translate into action remains to be seen, and a concrete timetable for implementation of this new plan hasn’t been announced yet.

But catering to that forthcoming demand is already underway. As The Guardian reported, Volvo will introduce its first all-electric vehicle in China in 2019.