You could argue OPEC, and those non-OPEC producers collaborating with the oil cartel to limit output, have done rather well this year.

The oil price, as measured by the most traded Brent Crude number, has been relatively stable since the agreement to limit output was implemented last year and excess inventory has been falling, aided by continued robust demand.

Bloomberg reports the comments of OPEC Secretary General Mohammad Barkindo: “There is a growing consensus that … a rebalancing process is under way. We are gradually but steadily achieving our common and noble objectives.”

We would take issue with the claim the objectives are noble.

Stitching up the market to support higher prices is hardly a noble endeavor, exploiting as it does the leverage of the few (producers) over the many (consumers).

But evidence suggests he is right in that the market is more balanced now than a year ago.

The question is: where is it going from March of next year, when the current agreement to restrict output expires?

“To sustain this into next year, some extraordinary measures may have to be taken in order to restore this stability on a sustainable basis going forward,” he is reported as saying.

He did not elucidate what he meant by “extraordinary measures,” but hints from other OPEC members suggest a number of developments could be at play.

There has been intense and unprecedented diplomatic activity between OPEC’s top producer, Saudi Arabia, and the largest non-OPEC producer, Russia, this year, following Russia’s agreement to come on board with supply cuts to reduce oversupply. The quid pro quo could well be the diversification of the Kingdom’s arms purchases in a move that supports Russia’s flagging economy with some much-needed exports.

The news channel Al Jazeera reported just this week about an agreement for Russian President Vladimir Putin to host King Salman — who would be the first sitting Saudi monarch to visit Russia — for talks at the Kremlin.

At the same time a multibillion-dollar deal was announced to buy S-400 anti-aircraft missiles, Saudi Arabia is also set to buy Russian Kornet anti-tank guided missile systems and multiple rocket launchers under the deal, the report states. Russia’s continued support for oil output cuts is crucial for the success of OPEC’s efforts to influence the markets. If Russia were to wilt, investors would see the agreement unravel and the oil price would head south.

So far, though, the agreement looks as solid as ever, with impoverished Venezuela suggesting even deeper cuts — although that could have more to do with the struggling state’s inability to produce to its capacity anyway.

More importantly, countries like Nigeria and Libya, which are exempted from the pact, “are making progress towards full recovery” of production, after which they could join the OPEC-led agreement, Reuters reported. The Financial Times also reported comments made by Eulogio Del Pino, the former head of Venezuelan state-owned oil company PDVSA, that between 10 and 12 additional countries from South America and Africa had been invited to join the deal when it comes up for expiry in March 2018.

The price has taken a bit of a beating in recent weeks after following a broadly supportive upward trend since a low point at mid-year. 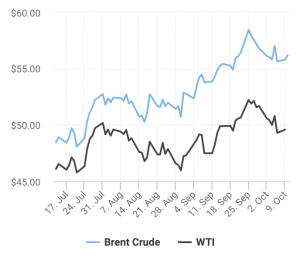 One could argue the recent declines are part of the peaks and troughs of that uptrend, but growing long positions on futures markets suggest producers have been hedging forward sales and that has had a depressing effect on the market. Shale producers, in particular, have been particularly adept at maintaining their viability by forward selling capacity as prices reach levels that show an attractive return.

The future direction of the oil price is of more interest than just gasoline prices, important as those are for the logistics industry. A continuation of the oil price’s three-month upward trend would be supportive of firmer metals prices, particularly for metals like aluminum and zinc, that have a large energy contingent in their total cost of goods sold.

So, the relative success of OPEC’s efforts to achieve a consensus around extending cuts would have a direct impact on the direction of metal prices in 2018.