There are reasons why miners — indeed, all producers across industries — seek to dominate market share.

The biggest reason? Being able to influence the market.

Yes, economies of scale come with size and in the case of mines to metal integrated trader Glencore that dominance in the zinc market gives them influence over not just mine output but concentrates, tolling and refining in a way that is not rivaled by any other firm.

Nor is the firm too kind to do things by halves — when they decide on an acquisition, on a market move, on a position, they do it decisively and with conviction.

In October 2015, Glencore sent shock waves through the market by cutting a third of its output, some half a million tons, to address what was widely seen as an oversupplied market and to stabilize prices. It worked — in just two years, the price has risen from $2,000/ton at the start of 2015 to $3,300/ton today. 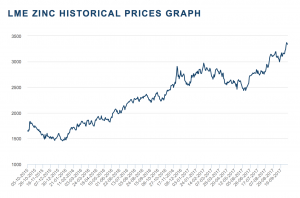 A Financial Times article states Glencore’s Australian Mount Isa and McArthur River operations took the brunt of the 2015 supply cuts, with output reduced by 380,000 tons. In total, the Glencore shutdowns removed 3.5% of global mine production, as the miner curtailed output from mines in Australia, Peru and Kazakhstan. In the meantime, end-of-life closures at Century in Australia and Lisheen in Ireland helped tighten the market.

Arguably Glenore’s action, while painful for zinc consumers, have in the long run done the zinc market a favor.

The rise in prices has supported the case for investment in new mines, such as Gamsberg and Duglad, due to come online towards the end of the decade. But even miners recognize you can have too much of a good thing, and limiting further price rises would not only help consumers but would help mitigate the demand destruction that comes from prices rising too fast and too far.

With that in mind, will Glencore look to bring back some, or all, of its idled capacity in 2018?

The firm continues to bet big on zinc, announcing last week its plans to increase its stake in Peru’s Volcan Cia Minera SAA, Bloomberg reports. With new mines due to come on stream in 2019 and 2020, supply constraints to the zinc market will eventually ease somewhat. Doubts remain, however, whether they will be enough to see the market in surplus.

Deshnee Naidoo, chief executive officer of Vedanta’s zinc unit, said a more sustainable zinc price would be $2,500-2,800 per metric ton. Others may argue with her, but Glencore has shown it can move markets and has the means — like Saudi Arabia did in the 1990s and 2000s with oil — be the swing producer, stabilizing a market for the benefit of both producers and consumers.

Traders often get a bad press for short-termism and the blind pursuit of profit, but Glencore has shown it acts in the longer term, too, and is capable of taking a strategic view of the market, of taking short-term losses in the pursuit of longer-term gains. The firm is uniquely positioned in the zinc market to act as a benign stabilizing element, keeping prices at a profitable but not demand-destructive level.

It is clearly not as simple to regulate mine supply as it was oil supply for Saudi Arabia. You cannot turn off a mine like you can the spigot of a pump.

But with so many diverse zinc resources, Glencore is in a better position that any to smooth out the dips and peaks, for the sake of its shareholders and for the market as a whole.