Precious metals dynamics have looked similar to base metals during these last couple of months.

After the price retracement in September, gold spot prices increased again. The gold rally that started at the beginning of 2017 appears set to continue. More movements to the upside could occur for the rest of the year. 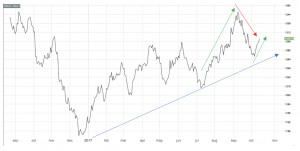 Silver prices, however, have traded sideways, showing less of a bullish sentiment than gold. However, silver has shown the same price movements (in different price ranges) from July to October (see chart below).

Does this set the foundation for a new long-term uptrend?

As Fouad Egbaria noted: “As of Oct. 1, palladium closed higher than platinum. The last time that happened? Sixteen years ago.” Palladium prices rallied, as did gold prices, while platinum prices traded sideways, similar to silver. 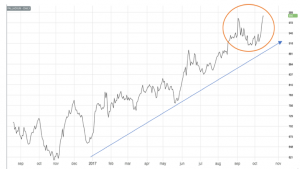 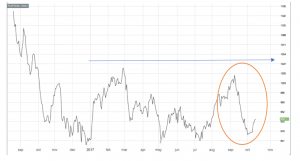 However, both palladium and platinum showed the same price pattern since July. Those price movements may point toward an ongoing bullish market.

As reported by Reuters, the commodities outlook for Q4 looks bullish. MetalMiner also remains bullish on both commodities and base metals, and expects more movements to the upside while the U.S. dollar remains weak.

A complete analysis of commodities and base metals for 2018 is published in our free Annual Outlook report.