The price of several metals has traditionally been looked at paired with that of another metal. For example, gold and silver prices are looked at in isolation and relative to each other, in part because both metals make up a major part of the jewelry trade.
Benchmark Your Current Metal Price by Grade, Shape and Alloy: See How it Stacks Up
So, too, are zinc and lead prices, where the correlation is not from market applications but from the fact lead and zinc are often co-mined from the same resource.
Like precious metals gold and silver, less prominent platinum and palladium can be both mined and used in very similar applications. The Platinum Group Metals, or PGMs, are often magmatic in origin and rare in economic concentrations. The majority of the world’s platinum and palladium comes from South Africa, Zimbabwe and Russia, where early low-cost surface mines have long since given way to deep, expensive and complex operations.
As the name suggests, platinum as long been the investor’s favorite PGM and enjoys the widest number of applications.
Recently, however, its quiet PGM peer palladium has caught investors’ interest.
Palladium has traded at a discount to platinum because of platinum’s greater cost of extraction and its wider scope of applications. But one application in which palladium does excel is catalytic converters for petrol engines. The diesel engine’s relative loss of favor over the last 12 to 18 months to the petrol engine has boosted demand for palladium, driving up the price to the point that it exceeded that of platinum this month for the first time in 16 years.
On Monday, palladium exceeded $1,000 per ounce on the London market compared to its platinum’s $950 per ounce. 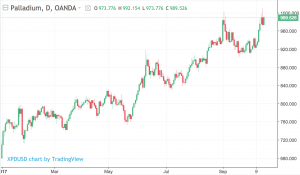 The reasons are not hard to find.
The platinum market is in surplus, but that of palladium is estimated by Joni Teves, an analyst at UBS quoted in The Telegraph, as experiencing a shortfall in production, which could push the market into a deficit of 830,000 ounces this year, as miners have cut back production.
In fact, John Meyer, analyst at SP Angel, is quoted as saying, “Marginal mine shafts have been closing at a rate of knots. We could see production in both palladium and platinum continue to fall as a result of ongoing rising costs. I don’t think the current rally (in prices) is enough to reverse that.”
Meanwhile, market demand is shifting.
Platinum that is used more in diesel engines has seen falling demand. With car sales growth featuring more in petrol-engine-dominated American and Chinese markets, and less in diesel markets like Europe, the demand bias has been for palladium, rather than platinum.
But even within Europe there is gradual shift from diesel to petrol.
Sales of diesel cars in western Europe fell from 45.1% of the market to 42.7% this year, according to industry research group LMC, with a forecast it will continue to decline to 39% by 2022 as petrol gains favor and hybrid or electric vehicle sales grow.
Some, though, are voicing caution.
Much of the enthusiasm for palladium has been investor-led — it is a small and relatively illiquid market, meaning not a large volume of positon taking is required to dramatically boost prices. Given time — and it would take time — catalysts could be altered to accommodate more platinum to the detriment of palladium demand, if the palladium price stayed at a premium to platinum over time.
In the longer term, electric vehicles are expected to sound the death knell for both metals (at least, with respect to automotive demand). Counter to this is the upcoming move by predominantly petrol engine China to increase its emission standards to the much tighter China 6a standards by 2020. Johnson Matthey says many manufacturers could leapfrog even this standard and aim to future-proof themselves to the yet more stringent China 6b standard expected in the middle of the next decade.
The enhanced PGM loadings such a move would require will maintain palladium demand — certainly well into the next decade — and could be the basis of investors’ longer-term enthusiasm for the metal.
Free Download: The October 2017 MMI Report
Either way, for the time being palladium has come out of the shadows and is having its day in the spotlight. For how long, we will have to see.