McKinsey is a highly respected firm of consultants, but we rarely report findings of its work because the material released into the public domain is often too generalist for our practitioners at the coal face of metal procurement.

Arguably, a recent article on the future of containerization could be said to be in the same vein, comparing as it does their findings in 1967 to today and weighing up current trends extrapolating how the industry could change over the next 50 years. Fifty years is a long time — many of us won’t even be working anymore by then — but of course changes will happen gradually over the period. Some of the developments they mention are already in process today.

Careful not to make specific predictions, McKinsey suggest the following may happen by 2067. Like cars, the firm sees ships becoming autonomous — a scary thought, but, realistically, if you can do it with trucks and cars, why not boats? 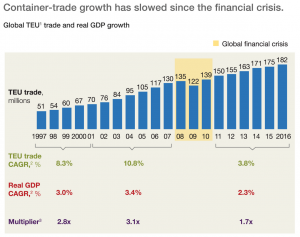 McKinsey suggests container trade, which is to all intents the majority of global trade, will by 2067 be two to five times larger than it is today. However, the trend over the last decade has been for slowing global trade growth, with the The Overseas Development Institute (ODI) saying the integration of production into global value chains has reached its maturity.

Offshoring certainly seems to be the trend of the last decade. Robotics and automation will negate many of the labor-cost advantages that spurred its growth. Global supply chains may in fact shorten in the future, so we would challenge McKinsey’s suggestion that global trade growth will spur the introduction of these new technologies; economics may, but not necessarily trade growth.

The firm does seem adamant that freight forwarding as a standalone business will be virtually extinct, since digital interactions will reduce the need for intermediaries and a consolidated market of three to four major container operators will, with the aid of digitization and AI, provide automated and autonomous transport chains.

McKinsey report says, and we quote, “….extend from loading, stowage, and sailing to unloading directly onto autonomous trains and trucks, with last-mile deliveries by drones.” By drones we are more likely talking autonomous vehicles than flying drones. Nevertheless, it paints a very different world from today.

The message? Massive change is on the way for the transport industry.

Change is coming in the use of digitalization and data management for transport companies to integrate themselves into their customers’ supply chains, improve service and cut costs. Secondly, as the technology becomes available, there will be an opening to invest in the infrastructure, both at sea and in terms of port facilities, to exploit the opportunities of automation.

Using the past to predict the future is always fraught with the potential for wrong turns as the future taking us on an unexpected path. We can look back and say why something happened with the benefit of hindsight; even from that vantage point, we can rarely say why. Choices are never clear cut and only appear logical because we are not examining the alternative futures a different decision would have yielded.

McKinsey probably has it right on digitalization, which is a trend that is already well underway. They are probably right on the development of AI and, to a greater or lesser extent, the impact that will have on automation of services and the movement of goods.

The timeline may be right or way off — only time will tell. But it does challenge us to pause and think how even some of these changes could impact our own businesses in the decades to come.