Energy Prices Becoming a Major Burden for Some Industries

An interesting article in The Telegraph this week explores the challenge facing the U.K.’s industrial sector in terms of power costs and the government’s competing priority of decarburizing the U.K.’s economy.

The U.K. is not alone in this.

Much of Europe and the U.S. face a similar challenge of rising energy costs and concerns that industry is disadvantaged relative to competitors due to high energy costs and that retail consumers are being forced to pick up much of the bill for the government’s green agenda.

According to the article, British industry already pays well above the average for Europe, and Europe itself is a high-power-cost region relative to many other parts of the world. 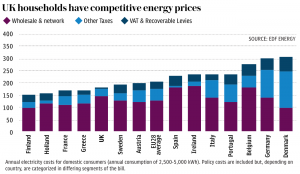 Only Denmark has higher industrial power costs than the U.K. Denmark generates much of its electricity from wind turbines, for which the technology is only just becoming economically viable, without subsidy and without costing in the backup generating capacity the variability of wind demands.

Decarburization and social policies, which includes subsidies for renewables but also programs to improve energy efficiency, add 20% to U.K. bills at present. But — and it’s a big “but” — they are rising fast.

Levies for such programs are estimated by Andrew Buckley, a director at the Major Energy Users Council (MEUC), to reach 40% by 2020, according to The Telegraph. Some major users, such as the steel industry, have been made a special case and the government has reluctantly granted an 85% rebate of green taxes for steelmakers. However, that makes the problem worse for firms that do not qualify; every subsidy for one is pressure to increase costs on another.

Some firms are moving off grid, investing in their own turbines, solar parks or micro gas plants, sometimes backed up by battery storage if based on renewables.

Rather than ease the problem for those left on the grid, it makes the situation worse. Funding a network with fewer consumers spreads the fixed costs over those that are left.

Of course, the U.K. is not alone in this, but policymakers create different policies in different countries depending on their priorities. Consumers, even in common markets like the EU, can therefore find themselves paying substantially more than their neighbours.

For the top ten highest energy users, the annual energy bills stands at around £120 million ($155 million). If they are paying 20% or more than their neighbor, that could equate to a £24 million disadvantage before they produce a single ton of product.

No wonder energy is becoming such a hot topic despite low oil and coal prices.