The November MMI Report: Some Optimism as Section 232 Wait Continues

Another month has come and gone — now it’s time to take a look back at what’s happened in the world of metals. 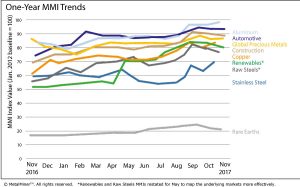 In August, all 10 of our MMIs saw upward movement. That changed the following month, when eight of 10 MMIs fell (albeit several of them fell by small amounts).

For our November MMI (tracking October’s activity), four of the MMIs moved up, five moved down and one held flat (the Automotive MMI).

Hitting some of the high points:

You can read about all of the aforementioned — and much more — by downloading the November MMI report below.