Heard of the Paradise Papers?

How about the Panama Papers a year back? Those revelations brought down the heads of two governments and severely compromised many reputations, exposing as they did a multitude of wrongdoings, notably related to tax evasion.

Well, the Paradise Papers are said to contain highly confidential details of the financial arrangements enjoyed by more than 120,000 people and companies named in the 13.4 million files, many of them leaked from offshore law firm Appleby, the Washington Post and Telegraph report.

The documents have been reviewed by the German newspaper Süddeutsche Zeitung and the International Consortium of Investigative Journalists.

We are used to stories of the super rich dodging their taxes. Some might even admire the ingenuity of their advisors, conveniently forgetting that when our local school is closed through lack of funds or we blow a tire on a highway that desperately needs pot holes to be filled, it is because our city, state or central government lacks the funds to keep such services running effectively.

Those funds are raised from taxation, and while you and I are paying our tax, there is a significant number of the super rich and many corporations that pay little or no tax. British charity Oxfam is quoted as stating that the top 1% of people in the world own more wealth than the other 99% combined. Or, in other words, 62 of the richest billionaires own as much wealth as the poorer half of the world’s population.

Nor is it just the eye-wateringly wealthy. Plenty of household names are among those revealed in the Paradise Papers.

Lewis Hamilton, four-time world F1 champion is among those running scams that allows him to run a private jet but not “own” it, thus avoiding declaring the income needed to run it as income. There will be many, many more similar revelations over the coming weeks, but whether it will bring any changes in controlling these ever more sophisticated avoidance arrangements is subject to doubt. It should be added, however, many of them are not illegal — they just exploit loopholes our politicians have allowed to be exploited for years.

OK, enough of the populist rant, you might be saying. What does this have to do with the metals markets?

Well, prominent names coming out as clients of Appleby, exploiting tax avoidance schemes on a grand scale are names like Facebook, Apple, and metals miner and trader Glencore, among others (including India’s Jindal Steel).

Some of Glencore’s most shadowy dealings are around the operation of and payments made in connection to its copper and cobalt mines in the Democratic Republic of Congo, where it runs the Katanga copper mine. Papers appear to support rumors already circulating that an associate of Glencore’s Dan Gertler, an Israeli businessman, is said by the Telegraph to be linked to allegations of bribery and corruption in central African countries over many years.

It must be said, nothing in the papers directly implicates Glencore in making payments of an unethical nature, but the suspicion seems to be where there is smoke there may well be — or may well have been — fire.

Glencore is one of the largest miners in the world, with sales of $152 billion (£116 billion). But even accepting that the papers raise the question of why firms need a shadowy web of 107 offshore companies to run such an enterprise, why are shareholdings and dealings held in these offshore entities if not for tax avoidance purposes? No company or individual is obliged to pay more tax than the law requires. Unfortunately for the majority of us, our lawmakers are incapable of agreeing internationally how we should tax corporations or those wealthy enough to access similar sophisticated services.

As a result, in excess of $150 billion a year of tax goes unpaid, according to the graph below from The Washington Post. 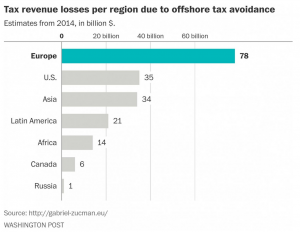