Aluminum Weakness May be Temporary

Yes, the aluminum price has fallen back this month.

Yes, it is looking decidedly weak compared to its high point of $2,215 per metric ton earlier this month.

Yes, inventory on the Shanghai Futures Exchange (SHFE) is building rapidly, hitting a record high this week of 666,581 tons, according to Reuters.

That’s not where we expected aluminum to be back in the summer when the market was talking all about smelter closures in China this winter and supply constraints.

Does that mean the market thinks the constraints are not going to happen? Is this another case of Beijing talking up their policies but failing to enforce them?

For anyone who has covered forward and is now thinking they may have acted too hastily, take a look at the fundamentals.

While this has been a bumper year for China’s smelters, January to October output is up 3.7% despite the closure of “illegal” unauthorized capacity during the summer. October’s output fell 7.5% year on year, according to a previous Reuters report.

Admittedly, quoting sometimes erroneous National Bureau of Statistics numbers, the report states China’s primary aluminum production fell for a fourth-straight month in October, churning out 2.55 million tons of the metal last month, down 2.3% from 2.61 million tons in September and from 2.73 million tons in October 2016. That does not yet represent the 20-30% cuts that some of the wilder predictions suggested, but is significant nevertheless in a market where demand is still expanding.

As such, it will likley be December before we will have any clear indication of how vigorous and widespread the closures have been implemented.

In the meantime, a third Reuters article suggests attention has been in the wrong place, and that what we should be worried about is two of the three key ingredients that go into aluminum.

That all started to unravel five years ago when alumina refiners going their own way, led by Alcoa, for whom now 85% of its alumina is sold at market prices, not directly tied to the LME aluminum quotation. As the below graph courtesy of Reuters shows, the alumina price has lost all connection with the aluminum price and is putting considerable pressure on smelters’ margins (hence the aluminum price). 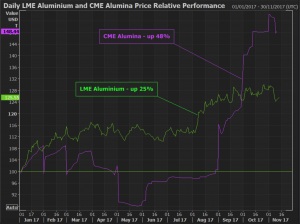 The other raw material cost component is carbon anode supply. As Reuters observes, China is one of the world’s major producers of carbon anode. But, even before this year’s round of seasonal cuts, with rampant smelter construction in the country it was directing ever-increasing amounts to meeting domestic demand, cutting exports in the process.

The world outside of China has been scrambling ever more desperately for replacement supply.

Even worse, there is limited ability for the supply market to react, with petroleum coke accounting for only a very small part of oil refiners’ revenues. Plus, most of that coke is not the right sort of material for making carbon anodes, anyway. There is little prospect of any supply response any time soon, according to Reuters.

Upward price pressures from alumina and increasingly constrained anode supplies suggest aluminum’s price rises are anything but over.

SHFE inventory may have risen, but that could be the result of speculative stocks building ahead of the winter season; if capacity cuts do bite later this month, those stock gains could reverse and prices could rise.

It is too early to call a top to aluminum. Next year could see a complex cost base with many interplaying elements continuing to support prices, even if supply cuts are more modest than feared.