The 14-strong Organisation of Petroleum Exporting Countries (OPEC), along with 10 oil states outside of the cartel, has reached an agreement to limit oil output until the end of 2018. This decision comes after what has already been more than a year of production cuts, the Telegraph reports.

This new deal, wider and more inclusive than the one running since the beginning of this year, will also extend to Nigeria and Libya. Previously, these two countries were exempt from the production quotas, despite being OPEC members, because of their struggles with internal political unrest.

OPEC crucially reached an agreement despite the last-minute posturing from Russian oil minister Alexander Novak, who warned that oil prices above $60 a barrel could reignite a production boom in the U.S. shale industry.

The agreement reached by the OPEC and non-OPEC members faces several serious challenges in achieving its objective of stabilising oil prices. The first is that one of its core members, Russia, does not appear to share the same objectives. They may be saying the right things, but according to Georgi Slavov, head of research at broker Marex Spectron, Russia’s cooperation is mostly “in words.”

“In reality Russia has been pumping oil like crazy and this will likely continue. As prices rise the incentive to cheat will too. Others may join the party,” Slavov said. “It is astonishing that the entire market is ignoring this. The market’s fixation is currently on what could happen. However, it is not paying attention to what is actually happening.”

A later article throws further light on the Kremlin’s position, saying Russia has a higher tolerance for depressed prices since the floating rouble cushions their budget.

Russia aims to balance the books at oil prices of $44 by 2021 under its fiscal plan, compared to $113 four years ago. Supported by ultra-low production costs, Russia is loath to cede market share and worried that prices above $60 a barrel will re-ignite significant U.S. shale activity, bringing prices down and reducing everyone’s market share as the same time.

They may be right. Wood McKenzie is quoted as saying that drillers have hedged 900,000 barrels in the third quarter when West Texas crude was around $52 dollars a barrel. A significant rise in 2018 and 2019 futures prices would lead to an avalanche of hedges, triggering a surge in U.S. rig activity. 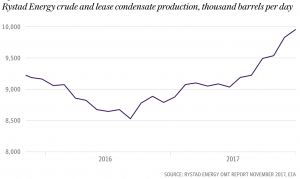 U.S. oil production has already reached a record of 9.66 million b/d following a 25% rise in the oil price this year. Rystad Energy is quoted as saying that U.S. output will jump to 9.9m b/d as soon as December, up by 600,000 b/d in four months, while the International Energy Agency forecast that U.S. “tight oil” will account for 80% of all new global supply by 2025, rising from 5m to 13m b/d. Total U.S. production will hit 17m b/d.

It must be said that not everyone agrees. Some analysts believe that the low hanging fruit has already been plucked and that well depletion and expansion into less favourable fields will require higher oil prices to unleash significant further investment. But doubters of the U.S. shale industry have been proved wrong before, so Russia’s concerns are certainly not without merit.

Finally, a balancing of supply with demand is predicated on demand continuing to grow. That largely means China, where GDP growth by some measures is already down to 5.6% and where Beijing’s efforts to avoid a credit bubble may force the market to slow further in the run-up to the end of the decade.

With rising supply from Kazakhstan and Brazil expected early next year, a rebalancing of the oil market may not arrive before the end of 2018 by which time either or both of the above challenges may undo the agreement reached this week.

At best, the extension of OPEC’s output cuts may stabilise prices at current levels but even that outcome is not a foregone conclusion.

PREVIOUS POST:
A Cheerful October for Crude Steel as Global Production Soars
NEXT POST:
The Final Monthly Metal Buying Outlook of 2017 is Here