The Tide May Be Turning for Steel Producers Everywhere

China is the world’s top producer of steel, but it hasn’t been that good or profitable for years.

Despite, or more likely because of the supply side squeeze enforced by Beijing, possibly up to 100,000 tons of “illegal” (not approved) production capacity has been closed down. Much of this was Electric Arc Furnaces (EAF) based on scrap raw material and deemed too polluting to be tolerated by Beijing.

In practice, EAF technology is anything but polluting and should be preferable environmentally to the blast furnace route. However, much of China’s capacity was small-scale private plants lacking environmental controls and permits.

The key word here is “official” because historically none of this “illegal” capacity appeared in the official figures, so approved mills are running at near record capacity, estimated to be 85%, making up for the removal of their domestic competitors. Many of these EAF furnaces were making rebar, so not surprisingly rebar is in short supply and prices are on a tear.

Iron ore, particularly higher grade 65% minimum Fe content iron ore is also doing rather well. Despite port stocks running at over a month’s supply prices have reached over $72/ton as mills re-stock with the most efficient-to-produce and least polluting highest grade ore, according to Bloomberg. 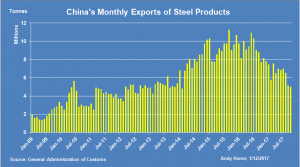 All this rationalisation of supply and robust domestic demand has taken its toll on exports. As we reported earlier this week, China’s steel exports have slumped by a third this year. And as the domestic market gradually moves from a buyer’s market to an allocation-driven seller’s market, prices are rising.

As China’s export prices rise and volumes fall, Southeast Asian producers are improving output and prices themselves. South Korea is on course to achieve its highest output this year since 2014.

China is grumbling that they are the ones going through the “painful process” of capacity reduction “while the rest of the world just watches,” according to Reuters, but the truth is the rest of the world has been rationalising its steel production for the last decade. It’s about time China cut back on a level of overcapacity that had reached biblical proportions, many times the total capacity of whole regions, never mind some countries.

China’s supply side reforms, improved capacity utilisation and higher domestic (and export) prices will, in Reuters’ opinion, do more than an anti-dumping or 232 action to bring about a structural change in the global steel market in the years to come.