The Rare Earths MMI took a three-point drop for the month, falling to 18 for our December reading. 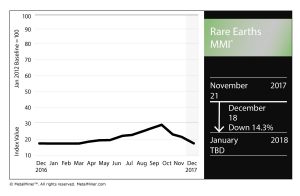 Save for an 11-cent increase in the Chinese yttrium price, the heavier hitters in this basket of metals  — terbium oxide, neodymium oxide, europium oxide and dysprosium oxide — posted price drops.
Benchmark Your Current Metal Price by Grade, Shape and Alloy: See How it Stacks Up

An article by Forbes chronicles the major bounceback of Australian rare-earths miner Lynas Corp., which rebounded after losing 99% of its share price.
The reason for the revival? The electric-car wave and environmental cleanup efforts in China, the Forbes article reports.
Surviving an oversupplied market that saw rare-earths prices plummet in recent years, a tightening of the market by China — the dominant global producer of rare earths — saw the firm’s fortunes reverse.
“Lynas, a former gold miner, somehow survived, and today it’s enjoying a rerun of the rare-earths shortage as China’s tougher pollution laws and the growing popularity of electric cars are boosting prices,” Forbes reports.

In other recent news, Namibia Rare Earths announced in November the acquisition of a portfolio of critical metal properties in Namibia.
According to a release from the firm, it agreed to acquire a “majority interest in seven projects ranging from exploration opportunities to near term feasibility stage” from Gecko Namibia (Pty) Ltd.

“The Gecko Namibia portfolio of properties will expand the Company’s commodity base from solely rare earths to a variety of highly critical commodities including cobalt, copper, zinc, lithium, graphite, tantalum, niobium, nickel, and gold,” the release continues. “Ground holdings in Namibia will increase from 221 km2 (Lofdal) to over 6,850 km2.”

The Democratic Republic of Congo is rich with rare-earths, like cobalt, used in things like computers, cellphones and electric car batteries.
However, political instability and violence in the country this year have understandably had significant effects on the rare-earths market in the central African country. (Of course, as has been mentioned in this space before, the market effects of the instability and violence is not the primary takeaway of these events, but is relevant insofar as we are talking about metals.)
Recently, at least 14 United Nations peacekeepers were killed after an attack in the eastern portion of the country Friday, the Washington Post reported.
In a statement Friday, U.N Secretary-General António Guterres condemned the attack, saying it constituted a war crime.
“This is the worst attack on UN peacekeepers in the Organization’s recent history,” Guterres said.
While the price of metals is a small consideration compared with the bloodshed in the country this year — in August, the U.N. reported approximately 250 people were killed in ethnic-based massacres — instability and violence certainly have an effect on production capabilities and, thus, metal prices for rare earths mined in the DRC (like cobalt).
Free Sample Report: Our Annual Metal Buying Outlook