Arcane as it sounds, by refusing to approve new judges to the World Trade Organization’s (WTO) appellate panel (a form of supranational court in all but name, a Telegraph article explains) the U.S. is depriving the panel of the resources to function.

The panel should have seven judges, such that at least three are always available to hear cases. With one judge having retired, the panel is down to six; by the end of this month, it will be down to four.

There is already a 40-case backlog and resolutions are taking too long, the Telegraph reports. Reducing the panel’s capacity further would effectively disable one of the WTO’s most important and successful functions, which is to settle disputes between states in a rules-based environment.

The U.S. action is driven by a deep-rooted dissatisfaction with the way the WTO operates and is aimed at achieving change rather than a desire to leave – despite what President Donald Trump tweets in soundbites.

Not Playing by the Rules

Firstly, the U.S. believes — with considerable justification — that some large developing countries do not abide by the rules, or rather hide behind the rules.

China, for example, is the world’s second-largest economy and has a disproportionate share of global trade. Yet, its status as an emerging economy allows it to avoid many of the constraints placed on developed economies.

Even after 16 years of WTO membership, China still has a massive state sector enjoying far-reaching subsidies and favored treatment by the state. In fact, recent actions in the name of combating pollution have, if anything, concentrated steel production even more among state producers as China, has shut 100,000 tons of electric arc furnace (EAF) private production capacity, thus concentrating and supporting power among the largely state-owned traditional blast furnace producers.

The second issue is the U.S. believes the WTO has become more activist over time, deliberately dismantling protectionist measures in its rulings, ostensibly in the name of promoting global trade but to the detriment of major importers (like the U.S.).

Some will undoubtedly criticize the U.S. for its actions, but better to force through change than wholesale resignation from the organization and the rules-based system that has done so much over the last 20 years to resolve disputes amicably and avoid trade wars.

Even if changes are accepted to the WTO rules, patterns of global trade will take time to adjust.

Steel jobs are not going to flood back to the U.S., regardless of the president’s assurances. As the article points out, the U.S. already has massive tariffs in place against Chinese steel, but the U.S. steel industry is not powering back to employment levels seen before the WTO. 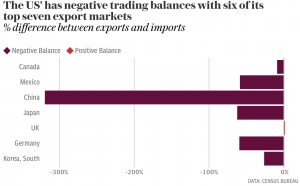 Trade imbalances within the North American Free Trade Agreement (NAFTA) fall outside of the WTO remit and are a topic in their own right, but arguably the U.S. imbalances with the rest of the world have gone on for long enough.

Providing a ready and reliable export market to emerging economies has lifted hundreds of millions out of poverty and achieved an industrial revolution in Asia and South America; that should now allow those countries to trade on equal terms.

PREVIOUS POST:
Will the Electric Vehicle Boost Base Metals?
NEXT POST:
This Morning in Metals: Global Steel Output Up in November