U.S. Steel Imports Have Boomed Instead of Fallen This Year

It is often easier to criticize from the outside than to resolve from within — that is as true of boardrooms as it is of government.

It should come as no surprise that President Trump’s well-intentioned claims during his election campaign to bring American jobs back to American steel mills — “When I’m president, guess what, steel is coming back to Pittsburgh,” he said during an April 2016 rally — have proved much harder to achieve in office than may have appeared to him and his supporters on the campaign trail.

Some believe the protectionist, low-hanging fruit of withdrawing the U.S. from the Trans-Pacific Partnership and ordering investigations into trade pacts such as NAFTA and the KORUS FTA have, if anything, exacerbated problems for domestic steel mills by prompting a flood of steel imports from firms trying to bring in steel before tariffs are hiked or other barriers are imposed. The New York Times has been accused — with some justification — of running an agenda counter to the Trump administration’s policies, but the facts are clear: steel imports have boomed since Trump came into power. 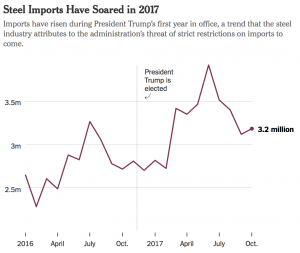 U.S. steel imports were up 19.4% in the first 10 months of 2017, compared to last year’s figures, according to the American Iron and Steel Institute (AISI). The New York Times points to ArcelorMittal’s decision to close a furnace at its Conshohocken, Pennsylvania steel plant in the new year, laying off 150 of the plant’s 207 workers as evidence of the impact. ArcelorMittal blamed low-priced imports, as well as low demand for steel for bridges and military equipment — both areas Trump promised he would make a key focus for investment if elected.

Although progress on trade issues has come too late for workers at Conshohocken, it is not too late for the industry as a whole.

The administration appears at odds over how to achieve control over imports, with some advocating hefty tariffs, others quotas, and all awaiting the results of the Department of Commerce’s 232 investigation by Jan. 15. The president will then have 90 days to decide what to do, the New York Times states.

If supportive and the report is acted on, plants like Conshohocken stand to benefit the most. Although underutilized at present, its speciality is ultra-strong, military-grade steel (a national security requirement if ever there was one).

Blocking imports, though, is not universally popular.

The auto industry frets that reducing imports will raise prices and impact competitiveness among domestic automakers, resulting in job losses worse than those experienced by the steel industry. 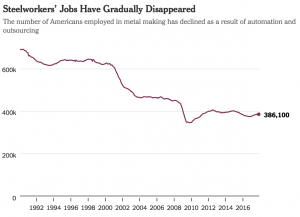 The steel industry itself has largely maintained employment over recent years after recovering from the financial crisis of 2008, despite investing in automation, which has helped improve efficiencies and productivity in the face of significant imports from Canada, eastern Europe and elsewhere (China features less nowadays and is well down the list due to earlier anti-dumping legislation).

Quite how the administration balances these competing priorities of domestic steel producers versus domestic steel consumers remains to be seen. Rhetoric so far this year suggests sympathies lie firmly with producers, but legislation needs to be finessed enough not to cause more damage than it intends to avoid.

As we say, criticizing from the outside is much easier than finding solutions from within. Coming up with viable solutions will be the administration’s big challenge in 2018.