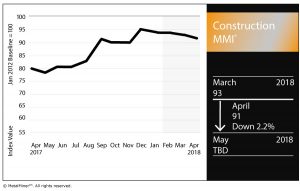 The Architecture Billings Index (ABI), produced monthly by the American Institute of Architects (AIA), hit a reading of 52.0 for February (anything greater than 50 indicates growth). That number is down from the 54.7 reading the previous month.
“Firm billings have now increased for the last five consecutive months and 11 months out of the last year,” the ABI report stated. “Inquiries into new projects and the value of new signed design contracts both increased in February, as firms remain generally optimistic about future work in the pipeline.”
By U.S. region, the Northeast posted the weakest month with a reading of 47.5. Meanwhile, the West led the way with a 57.6. According to the report, firms in the West reported the “strongest conditions for the region in more than a decade.”
The Midwest posted a 54.5 while the South was on its heels at 54.4.
Want to a see Cold Rolled price forecast? Get two monthly reports for free!