Construction MMI: March Spending Up Year Over Year But Down 1.7% From February

The Construction Monthly Metals Index (MMI) increased four points, up to 95 for our May MMI reading. 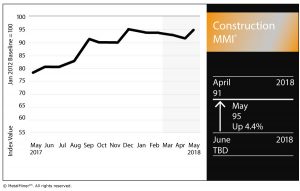 Within the basket of metals, Chinese rebar was down slightly on the month, while Chinese H-beam steel jumped 5.4%.

March spending was estimated at a seasonally adjusted annual rate of $1,284.7 billion, or 1.7% below the revised February estimate of $1,306.4 billion.

The March figure, however, represents a 3.6% increase from the March 2017 estimate of $1,239.6 billion. Through the first three months of the year, construction spending is up 5.5% compared with the same period in 2017.

As for private construction, it came in at a seasonally adjusted annual rate of $987.5 billion, 2.1% below the revised February estimate of $1,009.1 billion.

Billings Increase Slows, According to ABI

According to the monthly Architecture Billings Index (ABI), put out by the American Institute of Architects, billings increased in March, albeit at a slower rate than previous months.

The billings ABI for March came in at 51 (anything greater than 50 indicates growth). The ABI has now posted increases for six consecutive months.

According to the ABI report, the March increase “indicates that the majority of architecture firms are still continuing to experience improving business conditions.”

According to the report, 24% responded they had already seen “specific consequences” from the proposed tariffs.

“This share was highest for firms located in the West and Midwest regions of the country (32 percent and 28 percent reporting that they have seen consequences, respectively), as well as for firms with an institutional specialization (27 percent),” the report states. “Firms located in the Northeast were least likely to have already seen an impact, with just 13 percent of respondents from that region indicating such.”

Respondents also addressed the potential for future impacts. An overwhelming 91% said they expect to see an at least minor impact as a result of the tariffs.

Many respondents expressed concerns about rising costs of construction materials. According to the report, 53% agreed that it is “very likely” that construction costs will increase for most projects.