Oil Price Rises on the Back of Supply Concerns

OPEC may not be what it once was, but in concert with non-OPEC countries like Russia the cartel is showing it can still influence prices to its advantage.

After extensive negotiations behind the scenes, Saudi Arabia and Russia have agreed to reduce output to “manage supply”; that is, to support prices, the fruits of which are only just beginning to become apparent. 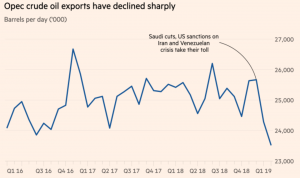 As the graph notes, circumstances have conspired to aid a general tightening of supplies.

But the most dramatic shift has been in Saudi Arabia with the fall in output coming in just a few months since November.

Optimism for rising demand took a fillip this week with apparent progress in U.S.-China trade talks, suggesting a deal may be within reach and pushing Brent crude futures prices to over $67/barrel (their highest since November).

But maybe the surprise is not that prices have risen, but that they haven’t risen further.

Ten years ago, such a curtailment in output coinciding with an optimistic view of future demand would have seen oil powering toward $100/barrel.

The fact that it isn’t is down to U.S. shale.

According to Reuters, quoting EIA data, the U.S. is set to be pumping 13.2 million barrels a day by 2020, making it by far the largest producer in the world. Shale oil and gas have proven the doubters wrong, showing immense resilience in the face of at times low oil prices and poor collection and distribution infrastructure within the U.S.

What started as largely a gas play now meets virtually all the U.S. oil and gas demand, with oil imports from the Middle East dwindling to an average of just 1.5 million barrels a day last year.

Higher prices will only further fuel investment in U.S. shale. Growth so far has been dramatic despite poor collection and distribution infrastructure, the Financial Times says. However, new pipelines going in to serve the giant Permian field in Texas and New Mexico will fuel further increases in output.

In the face of such relentless growth, global oil prices are not going to rise as far or as fast as they would otherwise do; shale will continue to exert a drag on prices, much to the reassurance of consumers.