The Renewables Monthly Metals Index (MMI) held flat this month, sticking at an MMI reading of 103. 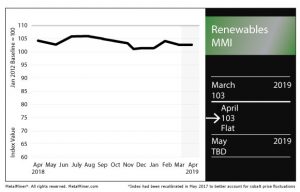 The St. Louis Post Dispatch reported an EPA agreement could open the door to cobalt mining at the site of an old lead mine.

“Missouri Mining Investments plans to begin cobalt mining at the mine upon completion of the cleanup,” the EPA said in a prepared statement. “Under EPA oversight, Missouri Mining Investments will conduct supplemental characterization work, prior to developing a more detailed plan to consolidate and cover mine waste and contaminated soil at the site, and remove contaminated sediments from the Metallurgical Pond and other surface water ponds and streams within the property boundary.”

As Fuller notes, 2019 could be a banner year for LME cobalt futures volume.

She added that after fluctuations in the early years of the LME cobalt contract, volumes spiked beginning around November 2016.

In other news, steelmaker Nucor Corporation announced late last month it would make a $1.35 billion investment toward building a new steel plate mill in Brandenburg, Kentucky.

The mill is expected to have an annual capacity of 1.2 million tons, according to a company release, and is expected to be fully operational in 2022.

The GOES MMI, the index for grain-oriented electrical steel (GOES), gained eight points for an April reading of 176. 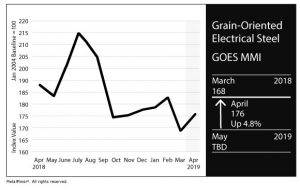