I found this article based on a report by the Belgian bank Fortis in their Asian Metals Monthly Review  — interesting not so much for its predictions on copper, but rather their analysis of China and the wider impact that may have on metals prices in general. END_OF_DOCUMENT_TOKEN_TO_BE_REPLACED

Metals Markets Price Indexes — Where Are They?

Today, I thought I would continue my earlier  piece on managing metal pricing volatility. You can find that article  here.

Have you ever received the advice of a consultant who suggested that one way to mitigate metals cost increases is to develop a contract pegged to an index? Well, truthfully, we’ve given out that advice, so let’s see what these indexes actually cover and who can take advantage of them.

The most famous of the metals exchanges (in which daily price information is published) is the London Metal Exchange. There, a company can participate in the largest metals futures market for a range of base metals including steel, nickel, copper, aluminum, zinc, lead and tin. Most recently, the exchange added steel (billets specifically), which we have previously reported on here and here. The last article also references the hot rolled coil steel futures market with Nymex. These futures markets, like the LME and Comex, are viable if you are buying primary metals, but rarely correlate well for semi finished metals. END_OF_DOCUMENT_TOKEN_TO_BE_REPLACED

An Innovative Idea for Aluminum Recycling 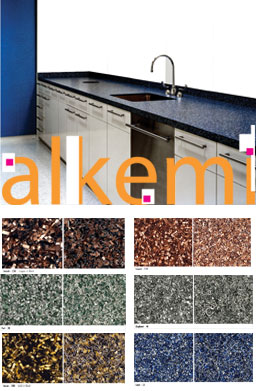 An expensive item to compress, the recycling of scrap aluminum is sometimes considered more trouble than its worth. Luckily, there’s a recycled surface material called Alkemi that saves the fine aluminum milling scrap that often graces local landfills, using that industrial aluminum scrap for beautifully-crafted countertops. The product’s creators from Renewed Materials say that Alkemi also decreases the “heavy smoke pollutant” that comes from conventional aluminum recycling. But Alkemi isn’t known for mere durability and environmental friendliness. The finished product is also attractive. Alkemi countertops, for example, are already being noticed for the striking shine that appears when light catches pieces of aluminum scrap. END_OF_DOCUMENT_TOKEN_TO_BE_REPLACED

The Return To Market Fundamentals?

An interesting article in Mineweb last week explored the nature of the current base metals market and how contrary to the last few years of relentless rises, some metals have come down substantially over the last 6 months. The article suggests we have a return to fundamentals, meaning supply and demand now drives the markets. Consequently, some metals are still powering ahead like tin,  although others have dropped around 50% from their highs, like zinc, lead and nickel. What has changed from just 6-9 months ago that justifies such a dramatic turnaround? END_OF_DOCUMENT_TOKEN_TO_BE_REPLACED

We don’t necessarily share the analysts‘ predictions that there is an imminent risk of aluminum rising to $3300/mt and beyond this summer — but we can see good support for the metal around current levels af $2900/mt. Where slowing demand is finally resulting in an easing of prices for most metals, aluminum is exposed to the risk of power brown outs disrupting supplies in many markets: Brazil, New Zealand, South Africa and most notably China. Consumption is forecast to grow in China, although we doubt the figure noted of 20-30% will be met this year as the economy cools slightly. Demand is softening in western markets, which will partially counterbalance Asian demand growth, but aluminum is almost uniquely sensitive to power costs as on average one third of the final ingot price is down to electricity. China is particularly at risk as the country has invested heavily in smelter capacity, currently 12.5 million tons per annum, on the back of historically cheap power. With power costs rising on the back of oil, gas increases, and most importantly thermal coal increases, many of these smelters could be marginal as the latest price rises feed through this year.

If capacity is idled and China becomes a net importer, the availability of metal on the world stage will change from the current comfortable balance to dwindling stocks in short order. It’s the risk which is giving aluminum its support.

China is without a doubt the most dynamic emerging market of the decade. For  the world’s largest communist state, it must feel like they are sailing a ship driven by the wind in one direction and the tides in another. After tax and regulatory changes last year that would have stopped most economies in their tracks, China’s growth has slowed a fraction —  from 11.9% for 2007 to 10.6% for the first quarter 2008. But the story is anything but a gentle reduction in growth. Under the surface, there have been changes in investment with winners and losers all around. END_OF_DOCUMENT_TOKEN_TO_BE_REPLACED

I’m allergic to sesame seeds, so when I order a burger in a restaurant, I’m always in the hunt for a good bun substitute. So I thought it might be  interesting to take a look at the current state of product substitutions in various metals markets. About a year ago, when nickel was trading at over $50,000/ton, it was almost a no-brainer to consider moving to other grades of stainless, as one example. What with the price of 304 stainless moving from the mid $6000/ton range to $5000/ton today, substitution to 200 series alloys looks a little less interesting, according to this article in Metal Center News. END_OF_DOCUMENT_TOKEN_TO_BE_REPLACED

In spite of statements from China in  Bloomberg,  stating that $2400/ton is the support level for lead and that China is cutting back exports to support the world price, the metal has continued to fulfill its image and has sunk like the proverbial lead balloon. The reality is China, which produces a third of the world’s lead, would lose money if it exported at current levels. Dealers are hoping the cessation of Chinese exports may support the price but so far there have been no signs that this is the case.

Following five years of  shortages earlier in the decade and massive investment in new mines, the metal moved into surplus and stocks have now reached an 18 month high precipitating the fall in prices to close at $2195/ton on Friday. The sentiment remains overwhelmingingly negative and prices could fall further.

Could We See The Return Of The Steel Penny?

Return you say? Since when was a penny made from steel? Well, for any of you too young to remember (thankfully that includes me) the US minted steel pennies during the second World War. The rising cost of metals has meant the US mint is losing $100 million a year making 7.4 billion pennies and 1.2 billion nickels at considerably more than their face value. At current metal prices, it costs 1.26 cents to make a penny (97.5% zinc and 2.5% copper) and 7.7 cents to produce a nickel (75% copper and 25% nickel).  That is better  than late last year though when a penny was costing 1.67 cents and a nickel nearly a dime. It’s debatable if this money is lost as it remains in circulation but the House panel that overseas the Mint would like a debate on the merits of bringing back a predominantly steel penny and nickel according to an article in the Associated Press. It raises a bigger question why not just junk the penny altogether ” when did you last buy anything for a penny? The country could save on precious metal resources not to mention costs, if it just dropped a coin that many would argue is out of date. According to Henry Paulson getting rid of the penny made sense but wasn’t politically doable ” now is that just the kind of logic you expect from a politician?

Is Power the Whole Story for Metals?

Is the rise in metal prices really so inevitable? We usually place considerable weight on articles appearing in Purchasing.com, but I have to take issue with a feature from yesterday which suggests metals will continue to rise on the back of power problems around the world. Certainly the first quarter of this year has seen it’s fair share of power problems, but many of them are unlikely to be repeated — nor was power the sole driver behind first quarter price rises. For example, the bad weather in China caused power problems, but it was a one in 50 year period of severe weather. Also, it is unlikely to be an issue going forward, serious as it was for aluminum, zinc and many ferro alloys. Power stations may be closed or run at reduced capacity for the Beijing Olympics, but so will the power hungry industries those power stations fed. The power problems affecting aluminum,  precious metals  and ferro alloy production in South Africa are more entrenched, but they were significantly exacerbated by heavy rains, as were the flooding of Queensland’s iron ore mines  — neither of which is likely to be of such magnitude again in the coming months. Somehow  I don’t see power being the deciding factor. It will have an influence in certain situations, but the extent to which demand continues to grow will be more of an issue.