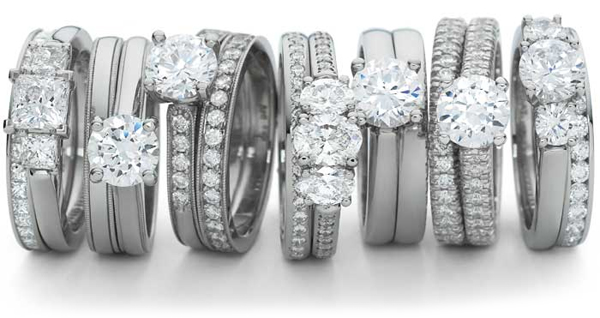 The summer has almost arrived, and wedding bells are ringing; flower girls are singing, and caterers and cakes and florists abound. People used to consider weddings an important time to splurge, lavishly spending money on that meaningful day. But with unstable economics, tighter budgets, and volatility in the precious metals arena, who wants to spend thousands on a fairy-tale wedding when that money could go toward the mortgage for your castle and moat?

Now that precious metals prices are through the roof, splurging on an expensive ring isn’t as exciting. Instead, many engaged couples realize that it might be wise to skimp. In a recent Reuters article, it was noted that many “cash-strapped couples [are switching] from platinum bridal rings to cheaper white metals such as white gold and palladium.”    Platinum already hit a record high earlier this year, and although prices have dropped a bit since that point, platinum is still up 40 percent from last year.

We discussed several metal product substitutions earlier this month, and it seems that the public is taking note. For example, there can be an enormous contrast between the prices of platinum and palladium. According to Reuters, “A 5 mm ladies’ platinum wedding band retails for 923 British pounds, almost four times the cost of a 5 mm palladium ring at 250 pounds ($500)  and a 5 mm white gold band at 263 pounds ($526).” Saving that kind of cash on the ring — especially if you look for similar savings on expensive items like flowers, dresses, and cakes  — just might save your fairy-tale wedding. By substituting white gold or palladium for precious metals, maybe you can even afford to live happily ever after!