Home | Product Developments | Innovative Minds in Schools Across the Country

Innovative Minds in Schools Across the Country

Who said  young people  were lazy? Today’s students aren’t content to sit around and watch TV or play video games. They’re running full-speed ahead to make a difference in the world around them.  Recently, the New York Times chose to highlight student innovation, promoting 23 inventions developed in youthful minds. Some of these innovative ideas rely on creative uses for metals.

Industrial engineering student Rafael Smith, for example, used piles of aluminum to design a two-story ÃƒÆ’ber Shelter for his senior project at Purdue University. Created to reduce sprawl in refugee camps, Smith equipped the shelter  to  use solar-powered electricity and provide a home for  two families. “The unit, which unfurls to roughly the size of a truck, is made of lightweight recyclable aluminum,” the Times explains,  so it can be cheaply transported by car or parachuted in to a disaster area.” 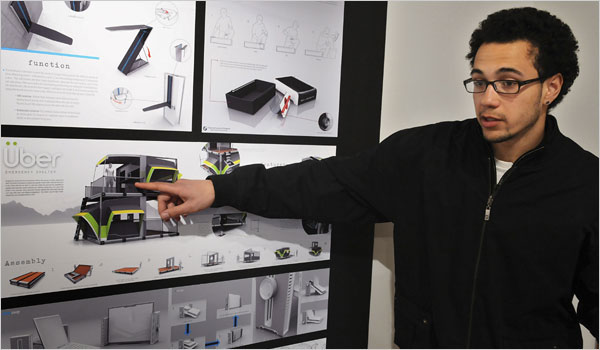 Meanwhile, Everett Meyer and Bryan Bai wanted to make sure the soundless Prius, with its lithium-ion battery,  wouldn’t pose a threat to the blind. To solve the problem, they created a new system to alert any passerby. While most electric cars are silent, their new system mimics typical engine noises and easily attaches to hybrid vehicles like the Prius.

College senior Eric Mattessich also works with cars; the New Jersey Institute of Technology student “devised a pair of small turbines one spun by the pressure of escaping exhaust and another by steam produced from the exhaust heat that can generate electricity to help charge a hybrid car’s battery,” the Times notes.  Mattessich’s  creation is small enough to fit in a compact car.

Stay tuned tomorrow for more stories about metals-related innovations, or read about more inspiring students in the New York Times!