It is always interesting to see what the analysts working for the major banks predict metal prices will do, whether you agree with them or not they often have access to more global trade data than the average buyer and though they lack the on-the-ground sense for supply and demand movements it often pays to listen to what they have to say. To my mind the greatest value lies in the fact many investors also take their word as gospel and as such if the analysts call the market as likely to rise the prophesy is often self fulfilling by the shear weight of the numbers.

Reuters recently ran a compendium of predictions from the last few months. Because markets have moved so much in the last 3-4 months we have only taken the most recent projections, from May and June. We took their numbers and recreated them into graphical format for easier comparison. 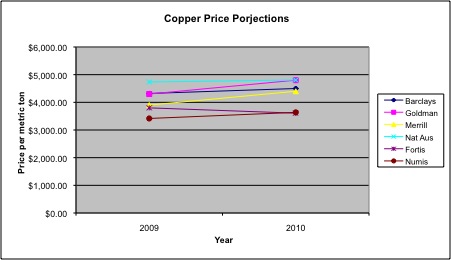 As you can see the predictions are remarkably similar in terms of trend direction and with only one exception they all show a small increase from 2009 to 2010. This, in spite of what the super cycle supporters would have us believe – that a China led surge in demand or an inflation driven flight to commodities will drive up the price. The current cash settlement price is $4800 so all of the parties are predicting further drops this year and none of them are predicting the price to break $5000/mt next year.

The graph for aluminum is interestingly steeper than that for copper. With the supply fundamentals for copper somewhat tighter than those for aluminum, we would have expected it the other way round. The aluminum market is in oversupply with Chinese mills bringing more capacity on stream and there are massive exchange and private stocks overhanging the market which is bound to suppress possible price rises. 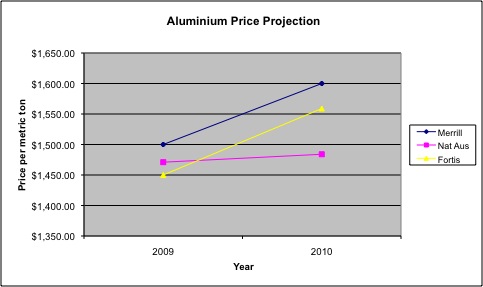 Nevertheless Merrill and Fortis are both predicting price increases, although only Merrill Lynch is suggesting they will reach $1600/mt. The current settlement price is $1563/mt so again all the parties are predicting prices will fall from current levels during this year and on average only regain to the mid $1500’s during next year.

By their very nature, predictions change with time and if challenged the individuals would reasonably reserve the right to amend their numbers in the light of subsequent developments but as a best guess in the current environment it certainly looks as if the collective wisdom is we are not in for a return to surging prices anytime soon.