Is uranium finally set for a price revival? One could be forgiven for thinking the fuel of the future as it was known prior to Three Mile Island and Chernobyl has no future in the current century. As this graph shows, the price has been on a downward trend for the last few years. 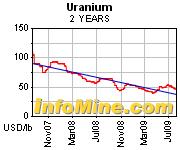 When all other metals hit a high in 2007-8, crashed and have now made significant gains, uranium has moved steadily downwards. After peaking to over $130/lb briefly in mid 2007, the uranium oxide price has drifted down to less than $47.50/lb today according to Jean Nortier, the CEO of Vancouver-based Uranium One quoted this week in Mining Weekly. But in fact the prospects for uranium are very good. As Nortier explained about his own company, we have probably the cheapest producing uranium mines in the world from a public company perspective ” and if you say our cash costs are $16/lb to $17/lb, plus we sit with non-cash costs of $14/lb to $16/lb. So our break-even is $30/lb to $32/lb before you start making an operating profit, So if the cheapest uranium mines in the world are producing at those numbers, then the marginal cost of production is a number significantly higher. In Nortier’s opinion, the price will need to rise to $80-100/lb before significant new mines can be brought on stream. Lower grade deposits such as those in Namibia, parts of the US and even Australia will need significantly higher prices to be viable. Only Kazakhstan is undergoing large scale expansion at the moment and is set to become the largest producer in the world according to this Reuters article. Kazakhstan’s investments are being driven by the realization that massive new nuclear investments are planned by many countries including their neighbor Russia. China alone is planning to raise nuclear power production from 11 GW today to 86 GW by 2020- an increase equivalent to France’s current total output. The country has signed for 11 under construction and 35 are scheduled with a further 80 in the planning stage.

According to Barbara Thomae, Senior Mining Analyst with the MineralFields Group quoted in the Energy Report, mined production of uranium fell short of consumption by 60 million pounds last year, and the shortfall was only made up by using recycled nuclear material from weapons from Russia, an agreement that will end in 2013. Demand is expected to grow at 30% over the next decade as new reactors require initial charging ” always a heavy front load to demand, and the newest generation of reactors being much larger than old designs. China for one is aggressively buying into uranium resources in Africa and Australia.

Countries like China and Russia will inevitably follow the path trodden by the French and Japanese if they are to seriously dent their reliance on coal and/or oil imports and reduce carbon emissions. Russia reducing their dependence on oil or gas, aren’t they a major producer you say? Yes they are but production is falling and oil and gas is the country’s main source of foreign currency. Russia has 8% of the world’s uranium and is a major builder of reactors with if not cutting edge then at least reliable technology, Nuclear makes a lot of sense in allowing them to free up dwindling hydrocarbons for export. In the case of many emerging markets, reduction in reliance on imported coal and/or oil is of more importance than carbon emissions. A fast industrializing world will inevitably look in part to nuclear as a clean and reliable source of power; the longer term price is likely to be up.

PREVIOUS POST:
The US is Importing Chinese Toxic Metals
NEXT POST:
A Look at the GDP Impact of Cap and Trade