It looks like we may almost roll into the 2010 round of iron ore price negotiations before we achieve a resolution to the 2009 price. CISA the China Iron and Steel Association who has been handling negotiations this year in place of Baosteel appears to have upset just about everybody. A Reuters report states that some industry experts and steel mill officials had urged the central government to replace some of CISA’s executives who are leading the iron ore negotiations. They criticized CISA for its “foolhardiness” and lack of wisdom in the negotiations, and for missing several chances to settle the price due to its insistence on a 40% price cut. They did manage to secure a small victory by agreeing to a 35% price reduction with Australian new kid on the block, Fortescue Mining but negotiations with Rio and BHP are still deadlocked with the Australians offering the same 33% reduction they have agreed with other Asian buyers.

Benchmark iron ore prices in China fell to $95 a metric ton this week, easing 17%  from its nearly one-year peak of $115 in early August, as traders said many Chinese steel mills stopped buying ore for future delivery. Having stocked up at $80 per ton in the second quarter, mills and traders are cautious with the finished steel market quite volatile. Contrary to reports that steel prices are continuing to rise in China, they have in fact eased in recent weeks as this graph from the MetalMiner Index shows. 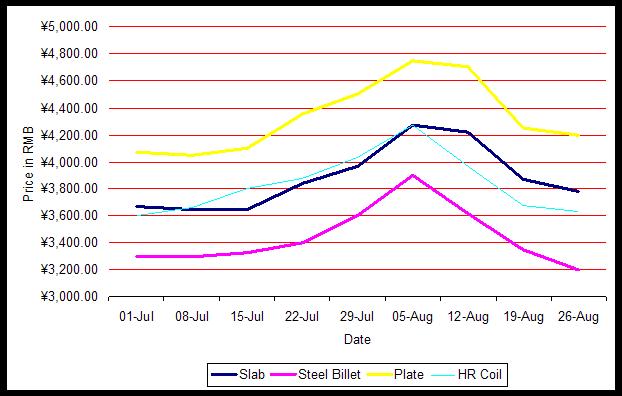 Mills are continuing to produce at near full capacity but demand is easing and export markets remain weak. Spot iron ore prices are widely expected to ease further, probably to $90 per ton over the coming weeks. Vale’s non confrontational relationship with the Chinese mills and the buyers acceptance of the 20% discount does seem in stark contrast to the position between CISA and Rio. You wonder if this is one situation where the issue of face has got in the way of sound business pragmatism.

PREVIOUS POST:
Cash for Clunkers is Dead, Hail the New King Cash for Household Appliances!
NEXT POST:
A Novel Use for Palladium Could Unlock Unlimited Power