Output in Germany’s engineering sector fell by nearly a quarter last year, worse than the industry’s most pessimistic forecast, and is not expected to rebound in 2010, the VDMA (Verband Deutscher Maschinen- und Anlagenbau – German Engineering Federation) industry association is reported in Forexyard.com. Orders for machinery, traditionally a strong export product for Germany fell at the fastest rate since statistics were first compiled in 1958. The economy as a whole shrank by 5% with mining and steel production equipment the only areas showing growth in the second half.

The one bright spot is large diameter welded steel pipe for gas transmission. Germany’s Europipe won the first contract for the Nordstream gas pipeline last year and has just won the auction for the second pipeline to run alongside the first according to the FT. Europipe will share the first contract with OMK of Russia and will share the second with OMK and Sumitomo of Japan, split 65/25/10 respectively. The 1220 kms (730 miles) project is to carry natural gas under the Baltic and is expected to make a significant contribution to meeting Europe’s gas needs over the next 40-50 years.

When both pipelines are completed, Nordstream is expected to carry 55 billion cubic meters of gas annually at a construction cost of over US$10bn. The pipes are to be 45 in diameter and have a wall thickness of between 1.06 and 1.61 depending on the depth and degree of protection needed at various points on the route. Each pipeline will require around one million tons of grade X-70 steel pipe coated on the inside with an epoxy layer and the outside with an anticorrosive finish. Norstream, a joint venture between various German and Dutch energy groups and Gazprom of Russia said the second contract was placed at much lower prices than the first, reflecting lower steel costs in 2009, and was over subscribed three times. The first pipeline should be completed in 2011 and the second by 2012. 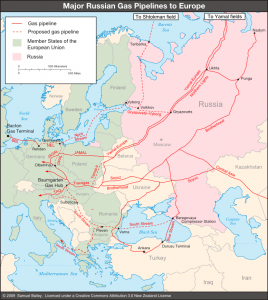 Producers have been positioning themselves for some time for another project called South Stream which is expected to start later in the decade. South Stream will require similar volumes of steel pipe, although the sub-sea section is slightly shorter at 540 miles. It will drop to depths of 2km’s (1.2 miles) under the Black Sea. In addition, further onshore pipelines will be needed to distribute the gas north through Bulgaria and south through Serbia and into Italy.

Gazprom has been pushing these projects hard because the Europeans are looking at a competitive pipeline called Nabucco that would by-pass Russia altogether taking gas from the central Asian states such as Turkmenistan and running overland through Turkey into Europe. It would be cheaper than the South Stream project by some $3bn. It won’t escape the casual observer that all of these routes avoid Ukraine. It has been Russia’s arguments with Ukraine over transit fees that have caused temporary gas shutdowns to the pipeline system over the last two years and brought it home to the Europeans that the current system is too concentrated both in terms of source and transit route for their long-term best interests. The Russians also want to increase their options other than going through Ukraine but are lobbying strongly against Nabucco. For the European’s $7.9bn for Nabucco sounds like a good investment – too many eggs in one basket is the adage that springs to mind.